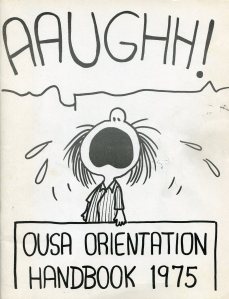 The cover of the 1975 OUSA Orientation Handbook featured Patty from the popular Peanuts cartoon.

“Dentistry gives you an opportunity to use your hands as well as your head” …. “The great myth that Home Science is a breeze just isn’t anything but a great myth” …. Surveying “is basically easy, but there is a heavy workload which requires consistent effort, and which becomes monotonous” …. Theology “has a lot of hard work and its rewards are almost entirely personal” …. Medicine “involves making an intense personal commitment” …. In Commerce “the workload is heavy. Don’t expect an exactly joyous atmosphere either”. So goes some of the advice from the article “Just what are we in for?” from the OUSA’s 1975 orientation handbook.

The Arts Faculty came in for the most analysis, with brief comments, admitted to be “unashamedly shallow”, on individual departments. These mentioned whether significant internal assessment – then a very new feature – was used, the state of staff-student relationships and the quality of teaching. Anthropology I, for instance, included “some very good lectures, and some very bad”. Economics I lectures were “often good for a laugh”, while teaching in the Russian Department was “abysmal”. One sign of the times was the comment on the attitudes of staff, with “conservative” a pejorative term. The Philosophy Department was “conservative and its attitudes sometimes approach arrogance”, while in the Classics Department “staff-student relations are cordial”, but “it remains a conservative department”. Large classes in Psychology meant staff couldn’t get to know everyone, but “they are not conservative, and as befits their chosen field of study are concerned with your welfare”.

To 21st century eyes, the entire publication is an intriguing mixture, ironically enough, of conservatism and new ideas. Though nearly 40% of Otago students were women that year there were just two women on the thirteen-strong OUSA executive, which was dominated by law students. Several of the men had impressive 1970s-style long hair and beards. Two of the exec later became well known public figures: information officer Jon Gadsby is a comedian and writer; and cultural affairs officer Jim Mora a popular broadcaster. Listed alongside the Catholic Society and Student Christian Movement were the Baha’i Club and Ananda Marga. The latter, meaning Path of Bliss, taught yoga and meditation: in those days of recent new exploration of space and deep oceans, “meditation is the inner spaceship to explore the vast uncharted areas of our own consciousness.”

Political radicalism was catered for in several of the clubs: HART (Halt All Racist Tours), COV (Committee on Vietnam for Peace in Vietnam) and SPAN (South Pacific Action Network). The latter took action “on matters of South Pacific concern from an anti-imperialist perspective”. The article “The life and times of Joe Cool, or how to make friends and influence all the other deadheads at Otago University” gave advice on “choosing your scene”. It noted that “on Campus power lies with a) The Newspaper-Literary magazine complex; b) the Students Politics group; c) the Charismatic Sceners; d) the Intellectual Ravers; e) the arty-farty drama types; f) the freaks. (Sport is no longer a power source but a valuable physical resource.)”

Most of the recommended eating places have long gone. The Siroco in Lower Dowling Street was “one of the City’s better coffee shops”, Big Daddy’s in the Octagon was “Great for a hot pie at 6am”, the Kandlelight Café at St Clair was “a great place for evening coffee” and Joe Tui’s in Albany Street was “famed in campus lore and legend – but no reported deaths!” Among the “interesting shops” were Isador in Rattray Street “for weird women’s clothes”, Poppourri in Lower Stuart Street with “good pottery and prices” and Maranatha in Bath Street for “the best quality leather goods in town.” There’s no mention of any supplier for one of the phenomena I remember vividly from the 1970s – macramé – but perhaps it could be picked up at the Witches Coven in Lower Stuart Street, a “usual commercial so called ‘with it’ shop.” 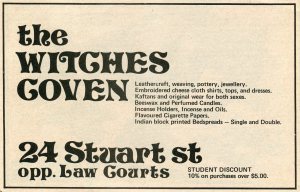 The Witches Coven could supply all the needs of the ‘with it’ 1970s student. Advertisement from the OUSA Orientation Handbook, 1975.