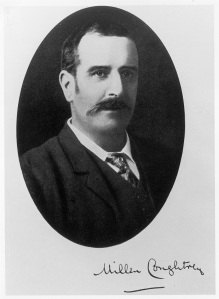 Otago’s first medical professor, Millen Coughtrey, was not short of an opinion or two. Lancashire-born and Edinburgh-educated, he was appointed to the chair of anatomy and physiology in 1874, but resigned two years later after a disagreement with the university over his right to continue in private medical practice. Coughtrey stayed on in Dunedin and was a respected physician and participant in numerous community activities; he opened a private hospital at St Clair in the 1890s.

Two major published speeches by Coughtrey suggest he was an entertaining presenter. “I love plain speaking, wherever it is desirable, and I shall, therefore, not hesitate to point out whatever may seem to me to be defects and errors in the present means and methods of conducting the practice of medicine, and of preparation for that practice.” So he declared early in his Introductory address in the Faculty of Medicine of Otago University, given in May 1875 at the gathering “to cut the first sod of medical education in this Colony”. Twelve years later, the university invited Coughtrey back to deliver the graduation address; William Christie was awarded Otago’s first medical degree at this historic event, and it was also the occasion when Frederick Fitchett was awarded New Zealand’s first LL.D.

As well as more general discussion of university education, in his 1887 speech Coughtrey reflected on the history of the Otago Medical School and made suggestions for improvement. These ranged from the division of the heavy workload of anatomy and physiology into two professorial chairs (that finally happened in 1905) to the fostering of original research. Some of his most intriguing comments related to clinical education. More needed to be done, he said, in the way of “systematic instruction by the bedside in the hospital”; he was concerned that the public did not really understand this. “The presence of medical students in the hospital does not necessarily involve that the patients should be tortured, that the unfortunate sufferers should be percussed out of one disease into another.” On the contrary, claimed Coughtrey, medical students made the hospital a better place: they provided a “wholesome check” on senior staff, who did not want to perform badly under their gaze; under careful supervision they contributed to medical care, promoting “the early recovery of every ailing inmate”; and they lessened the workload of the nursing staff “by doing the practical dressing of patients’ wounds.” Coughtrey’s opinion of nurses of this period was scathing: “With some exceptions the nursing in New Zealand hospitals is simply execrable”.

Arranging adequate clinical experience for medical students is a perennial challenge, but it was probably never more difficult at Otago than in the nineteenth century. Medical students may have been few, but hospitals were also small and training opportunities there limited. Public hospitals were yet to become centres of technology, open to all; instead they were the last resort of the ailing poor, with admission severely means tested. Most people paid to receive private healthcare – including surgery – in their own homes. Dunedin Hospital had particular problems, and an 1890 Royal Commission thoroughly condemned conditions there.

Thankfully things have moved on considerably since the 1890s, in part due to the advocacy of Otago Medical School staff like Coughtrey who campaigned for improved hospital services for the public and better clinical education opportunities for their students. If you are asked to consent to the involvement of a medical student in your care, remember you are not only helping with their education, but may also be contributing to the betterment of health services!