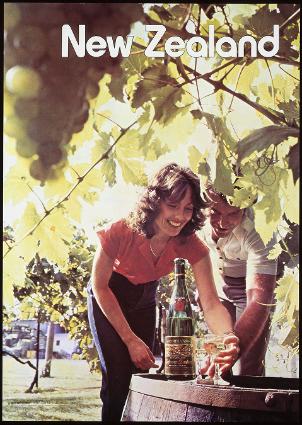 By the 1980s New Zealand was being marketed as a destination for wine tourism, and this became a field of teaching and research for Otago’s new Centre for Tourism. This 1980 poster, published by the Government Printer, was photographed by Terry Hann for the National Publicity Studios. Image courtesy of the Alexander Turnbull Library, reference Eph-D-TOURISM-1980-01.

It is now twenty-five years since the University of Otago established a Centre for Tourism and first offered a qualification in that subject. Its arrival was not without controversy – some academics argued that tourism lacked a body of unique disciplinary knowledge and could not be treated as the equivalent of other subject areas. Nevertheless, there was clearly a gap in research into the industry, and Otago was keen to make its mark in this emerging field.

In 1986 the university invited Prof George Doxey of York University, Toronto to visit. His report, “A programme in tourism at the University of Otago,” noted that the tourism industry was growing rapidly in New Zealand but this growth was not accompanied by solid research. A new tourism research centre could play a vital role in coordinating research and training in this increasingly important branch of the economy. The Otago Polytechnic already offered a one-year course in tourist studies; he recommended the development of postgraduate programmes at the university.

After further consultation with the tourism industry the Centre for Tourism got off the ground in 1989. It was, essentially, an initiative of the departments of geography and marketing, and had an interdisciplinary focus. These departments, along with sport and leisure studies at the School of Physical Education, had already been teaching on tourism in some of their third and fourth-year papers; most of these papers had arisen out of an interest in outdoor recreation. Twelve students enrolled for the new Diploma in Tourism qualification in that first year. It was a postgraduate qualification, though people with extensive experience in the tourism industry could enrol without a prior degree. Students completed four papers and a short dissertation.

Students were attracted to New Zealand’s first postgrad course fully devoted to tourism. After the first five years the centre’s director, Geoff Kearsley (previously a senior lecturer in the Department of Geography), noted there were now two applications for each of the 30 places available, and students in the Diploma for Graduates and Masters in Regional and Resource Planning programmes often took a tourism paper or two. The centre already had PhD and Masters students, and nearly a hundred dissertations and theses had been completed. The most popular fields of research were visitor satisfaction, environmental protection and wilderness management.

The growth of the Centre for Tourism led to changes. In 1993 Kearsley, previously half-time in the role, became full-time director, and its administration moved from the Department of Geography to the Division of Commerce, where it became part of the Advanced Business Programme for six years. The Centre’s research received a big boost in 1995 when Kearsley, together with Prof Rob Lawson of the Department of Marketing, received a $900,000 grant from the Public Good Science Fund for a project on sustainable tourism – this was the biggest external research grant yet awarded to the university. Kearsley was promoted to a personal chair in tourism studies the following year.

A 1984 poster promoting New Zealand’s recreational possibilities. Outdoor recreation was a subject of interest to various Otago departments and became an important field of research for the Centre for Tourism. New Zealand Tourist and Publicity Department poster. Image courtesy of the Alexander Turnbull Library, reference Eph-D-TOURISM-1984-02.

Meanwhile, important new developments were happening at undergraduate level. In 1994 the Centre offered its first undergraduate paper, TOUR 201, Principles of Tourism. This attracted over 150 students in its first year, and in 1995 a second stage 2 paper on world tourism was added. In 1997 a stage 3 paper on tourism and heritage helped meet student demand for further courses. In 1996 Kearsley commented that tourism was still being looked at vocationally in New Zealand, and needed to develop “as an academic subject in its own right”; it would “eventually stand alongside history, geography and other social sciences.”

Not everybody agreed. There may have been a market for an undergraduate degree in tourism, but many academics remained wary of its disciplinary credentials. The centre failed in its early attempts to have tourism included as a major within a commerce degree, but did succeed in having their own degree, a Bachelor of Tourism, introduced in 1999. In 2001 the Centre for Tourism reached a new stage of maturity when it became a full department within the Division of Commerce. Finally, in 2007, tourism became a major within the restructured BCom degree, and the BTour came to an end.

As the tourism industry has become an ever more important part of the New Zealand economy in the past 25 years, tourism has also developed as an academic discipline. Undergraduate degrees specialising in tourism are now also available at Waikato, Victoria, Lincoln and AUT universities, as well as in various technical institutes. While competition for the student market is intense, Otago has maintained a strong department, currently employing nine academic staff. As at the beginning, it retains a strong focus on postgraduate research, with thirty current PhD students.

Do you have any stories to share of the first twenty-five years of tourism at Otago?