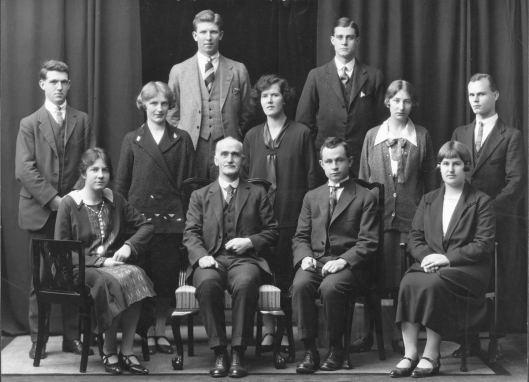 The physics staff and senior students in 1926. Seated are (from left) lecturer Agnes Blackie, Professor Robert Jack and lecturer Robert Nimmo, who was about to head to England for postgraduate research and would eventually succeed Jack as professor. Everybody has signed their name on the back of the photo, but I haven’t been able to match all the names and faces. Others include Helen Thomson, Phyllis Sutton, Allan Harrington, James Horn, William Somerville and Harold Taylor, who would all graduate BSc in 1927, plus Doris Wheatley and Evelyn Franklin. Later departmental photos show Agnes Blackie surrounded by men, but physics was clearly less of a male bastion in 1926! Image courtesy of the Hocken Collections, Department of Physics archives, MS-3846 Box 2, S06-516.

I’ve written about the beginnings of various departments created in the 20th century, but this week I look at the early decades of a subject which has been around for much longer: physics. John Shand was one of Otago’s first professors, appointed to the chair of mathematics and natural philosophy in 1870. “Natural philosophy” was an old term for “the study of natural bodies and the phenomena connected with them.” By the 1860s it was being overtaken by the term “physics”, though less so in Scotland; this may explain why Otago stuck with the traditional “natural philosophy” for its professor until the 1920s. Shand concentrated on teaching maths to begin with, but in 1881 and then from 1884 onwards he provided specialist classes in physics. As the university grew, the council appointed additional professors. In 1886 mathematics and natural philosophy were divided into two chairs; Shand chose to continue with physics and drop maths.

One of the remarkable features of physics at Otago is that until 1948 it had just two professors. Shand retired after 43 years of service and his successor, Robert Jack, after a mere 34 years. So, for nearly eight decades these two men had enormous influence on the research and teaching of physics in this country. I’ve written about both previously on this blog (here for Shand, and here for Jack). They were well remembered by many students, including health science students who sometimes struggled through their compulsory physics course! “Bobbie” Jack also became famous among the wider public as a pioneer of radio broadcasting. The professors weren’t the only long-serving staff, though: Agnes Blackie was assistant and then lecturer from 1919 to 1958, and Stan Hughes was a technician from the early 1920s to 1978.

Professors are important figures in university departments today, but once upon a time they held greater sway. Agnes Blackie, who started out as a student in 1915, recalled that they got to know their professors well, for “the professor was the whole department. In some of the larger departments – English, Physics, Chemistry – there might be an assistant who marked essays or practical books or helped with practical classes. For the rest, the professor did everything, gave every lecture, supervised every practical class.” She remembered Jack was “a bundle of nervous energy” whose workload meant “he curtailed his hours for sleep. He gave at least seventeen lectures a week, never giving a lecture without preparing it the night before; demonstrated eight hours weekly in the first year laboratory; spent a great deal of time helping students in the advanced laboratories; and then there was all the rest he had to do.”

Calendars for the 1890s outline the courses taught in Shand’s day. They provided broad coverage of various aspects of physics: heat, sound, light, static electricity, magnetism and current electricity. Textbooks included Deschanel’s Natural Philosophy, Garnett’s Heat, Tait’s Light, Thomson’s Electricity and Stewart and Gee’s Elementary Practical Physics; the advanced class used Maxwell’s Theory of Heat and Treatise on Electricity; Glazebrook’s Physical Optics and Gray’s Absolute Measurements in Electicity and Magnetism. As well as these physics courses, Shand taught the paper in elementary mechanics and hydrostatics: this was classed as part of mathematics by the University of New Zealand, but considered a traditional part of natural philosophy. When David Richards, who had an engineering background, became Professor of Mathematics in 1907, Shand handed over to him the teaching of mechanics, which was then renamed applied mathematics.

Shand and Jack were both renowned as thorough and clear lecturers, often faced with students who had been inadequately prepared at high school. Demonstrations kept their classes interesting. Blackie recalled that Jack’s lectures “were amply illustrated with applicances that the lecturer obviously enjoyed demonstrating. Wheels ran up hill, gyroscopes performed strange feats, waves ran along ropes, strings and tuning forks vibrated in resonance, light turned itself into brilliant colours, sparks cracked from electric generators, and I for one sat there fascinated.”

A generous bequest to the university by watchmaker Arthur Beverly, who died in 1907, provided a boost to the teaching of physics and mathematics with scholarships and funding for additional staff. In 1909 Thomas Hamilton became the Beverly Demonstrator in Physics, “the first adequately paid assistant any professor ever had,” according to university historian WP Morrell. In 1915 funds from the bequest also allowed the appointment of a “mechanic” – I guess we would now call him a technician – for the physics department. Another generous endowment, this time from the Mackenzie family of Walter Peak Station, enabled the appointment of Charles Focken, a Melbourne and Oxford graduate, as Beverly-Mackenzie lecturer in physics from 1926.

Physics has been located in the Science III building since 1977; prior to that it was in the “physics building” – the southernmost extension of the main clocktower building. The extension was built in the early 1920s, taking over the space once occupied by a large silver birch tree (transplanted to the Andersons Bay home of the architect, Edmund Anscombe) and a tennis court. Before getting its new wing, physics was squeezed into the original part of the clocktower building, together with many other departments. Laboratory work took place underground, in the basement.

I’ll close this post with a little inspiration from Agnes Blackie, who wrote some wonderful reminscences of her many years at Otago. She was a true fan of her subject: “I can’t imagine a better subject for a lecturer. Brimful of interest, it illumines and explains the world of everyday experience yet leads out in the furthest realms of space and inwards to the intriuging mysteries of the very small.” Long live the physics department!

4 thoughts on “From natural philosophy to physics”