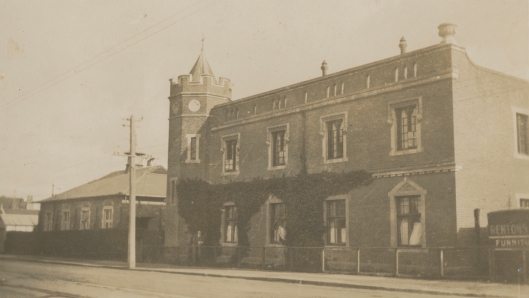 The first Selwyn building, photographed in the early 1900s. Another storey was added in 1930, together with a new wing. On the left is the Selwyn Collegiate School building, erected in 1907. After the school closed in 1911 it became part of the college. Image courtesy of the Hocken Collections, Selwyn College archives, 84-086/062, S16-503a.

There are many friendly rivalries between the University of Otago’s 15 residential colleges, but there’s one honour that nobody can ever take away from Selwyn College: that of being the oldest. It opened in 1893, but the planning behind it went back another twenty years or so, almost to the university’s beginnings. As I explained in a recent post, when the university moved from the centre of town to its current Dunedin campus in the late 1870s it had to abandon initial plans of providing student accommodation due to lack of funds. Students who couldn’t stay at home needed to find their own place to live, generally in private board. Over the years the cash-strapped university naturally prioritised teaching facilities when it planned new developments, and the idea of providing student residences fell well down the wish list. Studholme, which opened in 1915 to provide both accommodation and practical experience to home science students, was the only university-initiated hall of residence until Unicol opened as a centennial project in 1969.

The churches and – in the case of Arana and Carrington – groups of community-minded Christians, stepped in to fill what they saw as a need. Church people were concerned for the well-being of their own young people who came to Otago from all over New Zealand to study in its ‘special’ schools, including medicine, dentistry and mining. Residential colleges enabled them to provide oversight and pastoral care to students. In the case of the first two colleges – Selwyn and Knox – they also had connections to theological training.

Selwyn was the brainchild of Samuel Nevill, first Bishop of the Anglican Diocese of Dunedin (which covered all of Otago and Southland). The southern church was small and short of funds, but Nevill was determined to set up theological training locally and began a long fundraising campaign for a college in 1872. As he later remarked, ‘however much we may desire to obtain clergy who have had the great advantage of Home [that is, English] training, we cannot afford to rely only upon such a source of supply’. Also in 1872, two students started out as candidates for the Anglican ministry, living in Nevill’s own home (thanks to a wealthy wife, he had built his own substantial residence, Bishopscourt). Through the years he continued to accommodate others, with various clergy serving as tutors. In the face of considerable apathy and opposition, Nevill’s fund for a college slowly built up and at the 1886 synod the bishop announced ‘I have taken another step forward in this matter by the purchase of a house, very conveniently situated in relation to the university, which I should wish future students to attend if possible’. This house – destined to become the warden’s residence – became home to the theology tutor for the next few years.

Building finally got underway in 1891 and in 1893 Selwyn College – named after New Zealand’s first Anglican bishop, George Augustus Selwyn – opened its doors to its first six students. It was, from the beginning, a ‘mixed’ college, open to men studying at the university alongside the candidates for the priesthood; the foundation residents included five candidates for holy orders plus one medical student. This was seen to be advantageous to both groups, as Bishop Julius of Christchurch explained when the foundation stone was laid. Theological students would ‘be infinitely advantaged by contact with men who are training for other professions, and for the knowledge they will gain there … from those who look upon life from other points of view’. These other students, meanwhile, would ‘have the advantage of association with men, brave, spiritually-minded men, men already given heart and soul to God’s service, and they cannot fail to be better for such influence’.

The college struggled in its first few decades due to its ongoing lack of funds. By 1909 there were 25 residents and, with no shortage of applications, the warden was anxious to expand. In 1911 Selwyn Collegiate School closed and its building became part of the college. This was a private school for boys that had been taken over by the Anglican church and installed in an old house in the Selwyn College grounds plus part of the warden’s residence. In 1907 a brand new classroom block was opened for the school but it failed to attract enough students to keep going. The former classrooms became rather austere bedrooms for Selwyn residents. Some residents had their rooms in a neighbouring house purchased by Alice Woodthorpe, the warden’s wife, and later the college’s Board of Governors, which took over management of Selwyn from the St Paul’s Cathedral Chapter in 1914, purchased other neighbouring houses. The wardens’ families – wives, mothers and sisters – played an important part in college life in the early decades, often serving as matrons and cooks. 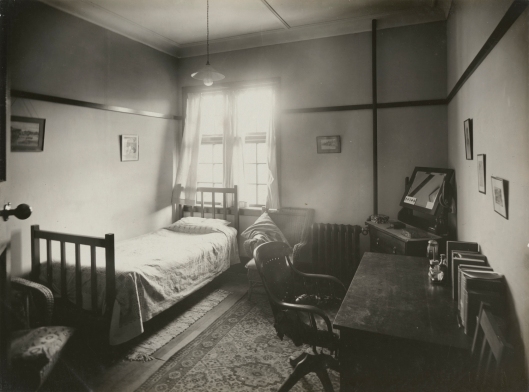 A Selwyn College bedroom/study, from an album by photographer C.M. Collins. It probably dates from around 1930, when the new wing was added. Image courtesy of the Hocken Collections, Selwyn College archives, 84-086/062, S16-503b.

Resident numbers dropped during World War I and the college actually closed for a year in 1918, after warden Robert Woodthorpe left. In 1919 LG (‘Algy’) Whitehead began a long reign – 31 years – as Selwyn warden, earning widespread respect and affection. He set about renovating the rundown buildings and, with the superior fundraising skills of politician James Allen to hand, was able to raise enough money to build a new wing of the college and add a third storey to the original building. Opened in 1930, the new wing included a splendid dining hall funded as a memorial by the family of the Massey brothers, killed in World War I. Life at Selwyn remained spartan by today’s standards, but was becoming increasingly comfortable. Later on, in the 1950s and 1960s, further buildings and extensions took the roll up to over 90.

Early Selwyn residents soon developed communal traditions, with some surviving into modern times; perhaps most famous is the Selwyn ballet, which dates back to 1928. The theological students were quickly outnumbered by others, particularly medical students. Nevertheless, religion remained an important influence, and until the mid-1980s all the wardens were Anglican clergy. They conducted services at the adjacent All Saints Church, which students were expected to attend. Algy Whitehead started regular high teas around 1920. He was a wine connoisseur who noted that it started as ‘a soft drink affair. Then it ascended to wine, but later degenerated to beer’. One of Selwyn’s most famous former residents, Rhodes Scholar, surgeon, Olympian and Governor General Arthur Porritt, later recalled that life in Selwyn in the early 1920s was ‘cosmopolitan to a degree, very free and easy (in contrast to Knox!) and though we were relatively few in numbers we could produce a team in almost any sport. Despite our “Boys about Town” reputation we were 100% loyal to our “Headmaster” – the Rev Algy Whitehead (and his two spinster sisters who cared for our material and domestic welfare) and tried to ensure that our not infrequent pranks brought no odium on him’. Knox, in good Presbyterian fashion, had much stricter rules about alcohol, but was more liberal in allowing female visitors. Both of these colleges developed a reputation for misogyny in later decades, and Selwyn was the last Otago college to admit women, in 1983 (even then protest from male residents and alumni continued for some years).

Another photo, this time of a common room, from the C.M. Collins album. Image courtesy of the Hocken Collections, Selwyn College archives, 84-086/062, S16-503c.

Residential colleges are now a central part of life at the University of Otago, but the tradition of living in college was slow to get off the ground. It took twenty years of determined effort for Bishop Nevill to get the first, Selwyn, opened. Otago has many reasons to be grateful to the man whose vision established a place which has provided a home for thousands of its students, and set an example for others to follow!

3 thoughts on “The first residential college”