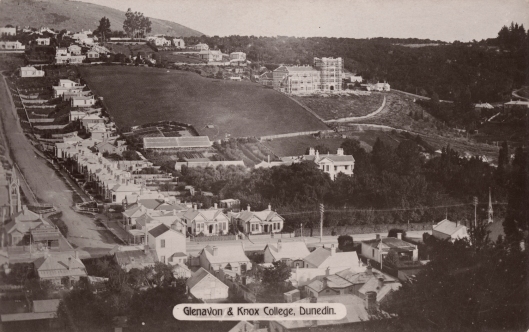 The Anglicans – a minority group in colonial Otago – were the first to establish a residential college at the university, as I outlined in a recent post. The much larger Presbyterian community was slower to get started, but once it did, it went one better, opening a college for men in 1909 (Knox) and another for women in 1911 (St Margaret’s). As the university grew, the Presbyterians also added a third college – Salmond – in 1971. As had been the case with Selwyn, it was the needs of theology students that helped get these colleges started, though they were open to other students from the beginning.

The campaign to open a Presbyterian residential college was started and led by popular Presbyterian minister Andrew Cameron. Cameron, one of Otago’s early graduates, was on the university council (he later served as chancellor) and convened the church’s committee on theological training. The church had started training its own ministers locally in the 1870s. Classes took place at the theology professor’s home in Leith Street (where St Margaret’s now stands), but between the professor’s large family, the library and a growing student body the space quickly grew cramped. Cameron was keen to establish a college which would provide a better space for theology training, together with residential accommodation for its students and those of the university. He identified a good site in Opoho – the land already belonged to the Presbyterian Church – and in 1902 set about a major fundraising campaign. The campaign started well with a large donation from one of New Zealand’s wealthiest men, John Ross, of the large importing and manufacturing firm Ross and Glendining. Other donations trickled in, and in 1908 the foundation stone of a grand and imposing building was laid. The first 40 residents moved into Knox College – named after the Scottish theological reformer – in 1909. Nineteen of them were students at the theological hall and the remainder were university students (9 of those completing the undergraduate university degree necessary before they could start theological training). With new wings and alterations, by 1914 the college had expanded to house 94 residents.

The Knox farce was a regular feature of capping concerts for many years. The cast of the 1946 farce, ‘Cameo and Mabelette’, included Ratu Kamisese Mara, future Prime Minister of Fiji (the tall figure, standing at centre). Image courtesy of Michael Shackleton.

The original St Margaret’s College in 1911. The building had previously housed the Presbyterian theology professor. Image from the Otago Witness, 19 April 1911, courtesy of the Hocken Collections, S10-133a.

Other than the master’s family and the domestic staff, all of the Knox residents were men: the idea that male and female students might live in the same college was well outside the norms of the era. But women coming to study at the university or teachers’ college in Dunedin also needed somewhere to live, especially as landladies often preferred male to female boarders (because men often spent more time out of the house, and also required fewer laundry facilities). In 1909 a Women Student’s Hostel Committee was formed by church people interested in establishing a women’s college. After various political complications, they managed to secure the lease of the building vacated by the theological college when Knox opened. It was a rundown building but the site, right next to the university, was ideal. After a few hurried repairs, early in 1911 the first residents moved into St Margaret’s College, which was named after a highly devout medieval Queen of Scotland. By the end of the year the new college had 15 residents, made up of 12 training college and 3 university students. It was a small beginning, but the college council had big plans; unfortunately it did not have any money. After several years of fundraising, in 1914 construction commenced on a new brick building, and at the end of 1917 it was complete, with room for 70 residents. Life in St Margaret’s was strictly controlled, but the women established a happy community at a time when they were not welcomed by all parts of the university. Almost a third of Otago students were women in the 1910s (even more in the war years), and as St Margaret’s historian Susannah Grant points out, the college ‘stood on the hill as a visible symbol of women’s increasing participation in higher education’. It also served as a focal point and meeting place for all women students.

Knox and St Margaret’s grew through the decades, especially during the 1960s, when both added new wings. By the end of that decade Knox provided a home for 155 residents and St Margaret’s for 170. There was no shortage of demand for student accommodation, with the university roll doubling between 1960 and 1970. That was one of the motives behind a 1960s scheme to build another women’s residential college in the grounds of Knox College. The initial spur for the new project was, however, the needs of women training for church vocations. Since 1903 women training as Presbyterian deaconesses had lived together as a small community, but some of their leaders felt they would benefit from living alongside other students, just as men training for the ministry did at Knox College. After all, the women already shared some classes with men at the theological hall. In 1963 the Presbyterian Church approved the scheme for a new residence, which would cater for women training as deaconesses as well as other women students of all denominations and all faculties. The idea that Presbyterian women should be granted the same privileges as men gained further impetus the following year, when the church approved the ordination of women as clergy. Nobody yet considered the more radical possibility that men and women might actually live together in one college.

A fundraising appeal got underway in 1965; generous government subsidies for the building of student accommodation meant the church only needed to raise part of the expense. There were considerable delays, with the government deferring its contribution due to financial difficulties and tightening controls on the building industry, but construction finally started late in 1969. In 1971 the first intake of 140 women moved in; three were students for the Presbyterian ministry, with the rest at the university or teachers’ college. Salmond Hall (known as Salmond College from 2006) was named for a prominent local Presbyterian family, in particular Mary Salmond, a former principal of the deaconess college, and her brother James Salmond, a minister and leader of Christian education. The first warden, Keren Fulton, combined experience and good Presbyterian credentials; she had run the YWCA hostel, Kinnaird House, and was a Presbyterian deacon.

Salmond quickly developed a life of its own. Though it shared a few facilities, such as tennis courts, with its older neighbour up the hill, and they held a few combined social events, Salmond and Knox maintained distinct identities and cultures. They were, however, governed by the same council. Once Salmond was up and running that council turned its attention to the needs of another growing group of students for the ministry: those who were married, often with children. In 1976 it opened a new complex of flats in the Knox grounds, named Somerville Court in honour of Knox master and university chancellor Jack Somerville. They included flats designed for families alongside others which catered for the growing demand for flats from groups of single students. As private flat provision grew, there was less call for these flats, so they were absorbed into Knox College. Together with other additions and alterations, this expanded Knox to cater for 215 residents; St Margaret’s now accommodates 224 residents and Salmond 238.

An aerial view of Knox College in 2008. The Somerville Court flats are to the left of the main building, and the Presbyterian theological hall (now the Knox Centre for Ministry and Leadership) and library at the rear. Image courtesy of University of Otago Marketing and Communications.

Knox, St Margaret’s and Salmond are now formally affiliated to the University of Otago, but continue to be owned and managed by the Presbyterian Church. Despite their religious background, they have always been open to students of any faith (or none). I suspect, though, that some of the Presbyterian founders might be a little surprised to know that the college they established for young ladies in 1911 has had a Catholic priest (Peter Norris) as warden since 1989! They might also be surprised to discover that the colleges, like all at Otago, accommodate both men and women. Salmond did not remain a solely female domain for long, admitting a few men from 1975, while St Margaret’s admitted men for the first time in 1981. Knox admitted its first woman as a senior resident in 1982, meaning it narrowly escaped becoming the last single sex college at Otago; both Knox and Selwyn provided a home for undergraduate women from 1982.

With over 600 residents each year, the Presbyterian colleges make a big contribution to the university (and in Salmond’s case, also to the Otago Polytechnic). Do you have any stories to share of their past? I’m especially interested in hearing memories of Salmond, since it doesn’t have the benefit of a published history, like Knox and St Margaret’s!

Salmond College in 2009. Image courtesy of University of Otago Marketing and Communications.