The Sextet has been entertaining audiences at Otago’s capping show with beautifully-sung and witty words for over a century. Given its tendency to come close to the line – and sometimes to cross it – with offensive subject material, it seems only appropriate that its origins were not ‘politically correct’. The capping show itself dates back to 1894, when the University of New Zealand authorities banned public graduation ceremonies after becoming fed up with riotous student behaviour at these supposedly formal occasions. That prompted students to develop their own capping carnival of dances, concerts and processions, while the official graduation ceremony, when reinstated, became a much more seemly affair.

The capping concert soon became a hit with both students and the public, offering amusing commentary on the life and personalities of the university in particular, sometimes extending to the rest of Dunedin and the wider world. Alternative lyrics set to popular tunes were one of its standbys. One of the Sextet’s most famous old boys, conductor and composer Tecwyn Evans, researched its history as an honours project in 1993. He traced its origins to the appearance of ‘Coon’s Quartette’ at the 1903 capping concert. Presumably they made themselves up in ‘blackface’, then popular but later heavily criticised for its racist stereotypes. A review of the 1905 capping concert noted that ‘a coon tableau and a cake walk by a quartet of coloured gentlemen went well’.

The 1903 quartet was followed by various 4 or 5-man combinations, with the first 6-man singing group appearing in 1912. By 1919 the Sextette (as it was known until 1966, when it became the Sextet) was a regular feature of the capping concert, famous for its cheeky words sung with angelic voices. An ODT review of the 1923 concert noted ‘their rendering of topical verses was to many the very best item of the evening. In their first appearance they made play behind great song books of ’Varsity blue. Their songs when they appeared in evening dress in the second half were particularly clever and most amusing as one after another unburdened himself of the confession of the murder of some professor or other equally undesirable person. They also successfully burlesqued the Sistine Choir, and were rewarded with the most prolonged and emphatic applause of the evening’. The tradition of appearing in clown costume for some items and in evening dress for others quickly developed, though occasionally they branched out into other outfits. 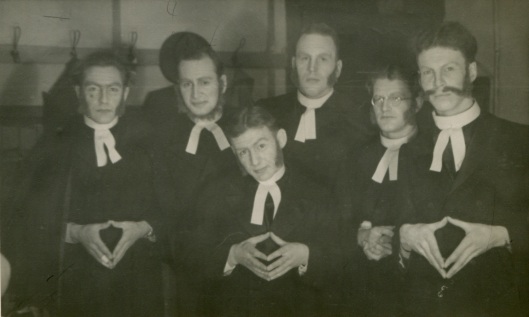 The 1948 Sextette dressed as Victorian clergy to fit in with the theme of the capping show, ‘Dunover, or Cargill Rides Again’ (in honour of the centenary of the Otago colony). Left to right: Ninian Walden, John Somerville, Linley Ellis, Brian Neill, Ritchie Gilmour, Michael Shackleton. Photo courtesy of Michael Shackleton.

The Sextet, like the capping carnival, took a break during World War II. When the concert recommenced in 1945, getting traditions going again with no experienced seniors to help proved tricky. Concert director David Cole (future dean of the Auckland medical school) noted that ‘we could only find a quartette the first year but the sextette has reigned supreme again since then’.

Writer James K. Baxter, who was Burns Fellow at Otago in 1966 and 1967, was a fan of capping shows, ‘chiefly on account of their vigour and their freedom of satire, both of which the country sorely needs’. In a review in the notorious but short-lived student publication Falus, he commended the 1967 production as more sophisticated than usual, though it did mean that ‘the sheer drive of spontaneous gutsiness was not so strong’. Fortunately, the ‘casual energy of Sextet provided a counterpoint’. Their performance included a ‘Geering interlude’ – presumably a commentary on the well-known theology professor, who was tried for heresy that year – among other things. ‘The alternation of wide-open satire with straight singing broadened their presentation … I think they were indispensable’, wrote Baxter.

Members of the Sextet were chosen for their vocal skill. Shy young first-year law student Peter Chin headed along to the audition for the large capping chorus with some friends from school in 1959. At the audition, talent-spotters suggested he should audition for the Sextet, and he was to sing with them for 3 of his 5 years at university. Becoming part of this elite group provided him with an instant introduction into student society. Chin – a future mayor of Dunedin – later became a well-known performer in local productions. The abilities of the Sextet have, naturally, varied from year to year, but there are some very famous names among the old boys, with vocal stars Roger Wilson, Martin Snell, Simon O’Neill and Jonathan Lemalu all lending their talents to the group during their university days. Although the performances have been a cappella for many years, in the past the group had a piano accompanist, and generally sang in unison rather than with the harmonies which became a feature during the 1970s.

The lyrics, also, varied in quality from year to year; sometimes the Sextet wrote the words themselves, and sometimes they received help from others. An anonymous article in a 1991 graduate publication noted that the content varied ‘from the traditional to the topical and from the harmless to the emphatically unsuitable’. Certainly the level of sexual innuendo in the lyrics grew and became more explicit, and in 2010 Rape Crisis criticised the Sextet for trivialising rape and sexual abuse in some lyrics.

Because the capping stage was open to men only until 1947, the Sextet started as an all-male group, and so it determinedly remained. In 1966 the show featured an all-female vocal group, named the Sextette, in addition to the all-male Sextet, but it proved a one-off. The ODT reported that ‘the girls do a good job, but their voices are not strong enough and most of their words are lost’. Finally, in 2001, a new female a cappella group – the Sexytet – debuted at the capping show, becoming a regular feature. The women’s group, which settled on ‘1950s housewife’ costumes, performed witty and smutty songs in beautiful harmonies, as in Sextet tradition.

Through the years the Sextet has provided a lot of laughs to a lot of people. And, though they often put in a lot of work practising, the singers have clearly enjoyed themselves very much too (with a notable exception in 1993, when they were pelted with beer cans when performing as a warm-up act before a rugby test match at Carisbrook). Video of performances by Sextets and Sexytets of recent years can be found on Youtube – viewer discretion is definitely advised!

The 2014 Sextet. Through the years the clown hats have been lost, but more make-up added. Photo by Daniel Chew, courtesy of OUSA.

15 thoughts on “A chorus of laughs – the Sextet”