The absent-minded professor is not a mythical figure; numerous people have fitted this description through Otago’s history. I thought it would be fun to lighten the midwinter gloom with a few of the more entertaining stories of such characters. I must stress, however, that I have considerable sympathy for these people. It is all too easy for scholars to become caught up in the pursuit of their intellectual passions and lose track of the world around them! 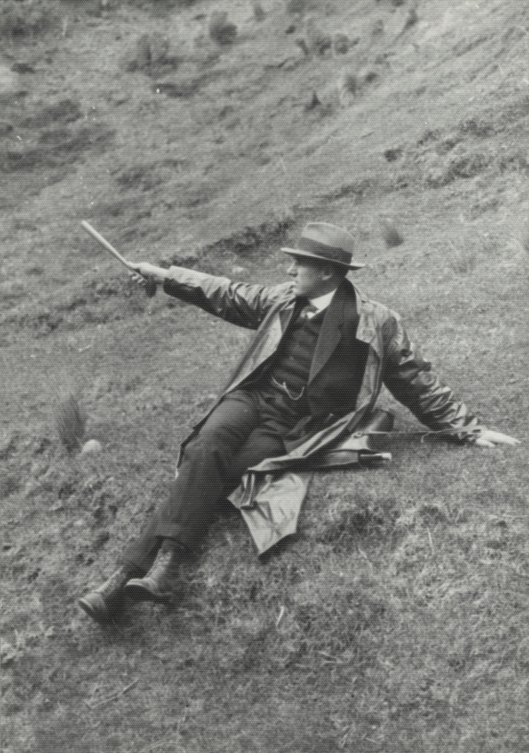 Noel ‘Bennie’ Benson in characteristic pose, pointing out a feature of geological interest during a field trip in 1924. Image courtesy of the Hocken Collections, Department of Geology archives, MS-3195/132, S16-591b.

The most notorious absent-minded professor in Otago’s past is Noel Benson, who was geology professor from 1917 to 1950. Benson – known as ‘Bennie’ to generations of students – was an excellent geologist, who received one of the ultimate accolades in science, Fellowship of the Royal Society (London). He was a tall and somewhat shambling figure. John Mackie, a student of the 1920s and 1930s who went on to teach in the School of Mines and founded the surveying school, recalled that Benson ‘wore on all occasions an ancient, somewhat shapeless, dark tweed suit which bore the slightly green sheen of age’. At one point he acquired a new suit with two pairs of trousers, but it didn’t survive long. One day, as he assisted a student examining a map in a practical geology class, there was ‘a powerful smell of scorching’. The professor hadn’t noticed the heater under the table, and when he stepped back ‘the toasted fronts of his trouser legs fell out to reveal his pink long-johns’. A few weeks later, running late to meet a visiting scholar at the railway station, he tripped over the tram rails and fell, removing the knees from the second pair of pants. ‘Next day we saw a limping Bennie clad in the old familiar garb’.

Benson was not the best of lecturers, since he generally spoke with his eyes closed or facing the board, forgot to turn the lights on after showing slides or tripped over the projector cord, and often ran over time. As Mackie noted, ‘his thoughts were often far away on trilobites, or the structural features of the margin of Australasia, or the geology of eastern Otago, and if you spoke to him on such occasions he would reply automatically, “Yes – just so!”’. While he was courting his future wife – Helen Rawson, the home science professor – Benson became even more absent-minded than usual: as he lectured in the mining school he gazed ‘dreamily out the window to the home science building opposite’ and addressed ‘burly’ mining students as ‘my dear’, reported long-time physics lecturer Agnes Blackie. Helen Benson did her best to assist her husband in practical matters; for instance, she attached his compass, eraser and pencil to his button holes with string so he had less chance of losing them on field trips. But she couldn’t prevent some of his more famous lapses, such as the time he set off to work carrying his suitcase and the ashcan lid, carefully depositing his case at the front gate and taking the lid to the university.

Despite – or perhaps because of – his eccentricities, students regarded ‘Bennie’ with affection, and his knowledge and passion for geology inspired many. They were less fond of him when he drove them on field trips. John Mackie recalled ‘descending pale and shaken from his vehicle after being driven around winding roads in the bush, mostly on the wrong side, while he was peering at outcrops’.  Fred Fastier wrote that ‘One reason for an astonishing lack of collisions was that Benny kept his trafficator out “just in case” he might need to turn right. He would also get down to his lowest gear at least a mile away from the Mount Cargill Road lest he should forget to do so later on’.

Unfortunately, Benson was not the only absent-minded driver on the Otago staff. Another famous case was his contemporary Henry Devenish Skinner, the anthropology lecturer and museum director. Neil Howard recalled ‘one hair raising trip when driving out to Murdering Beach excavation site he went around the tortuous corners on the old Mt Cargill road on the wrong side, blowing the horn vigorously as he went. “Please excuse the horn,” says he, “you cannot be too careful”’. Another famous driving story relates to history professor William (‘Willie’) Morrell. His daughter Judith Nathan kindly shares the ‘best known story’ of the professor’s ‘legendary absentmindedness. He left my mother behind at the Vice Chancellor’s residence at St Leonard’s. He was taking the guest of honour home so the guest sat in the front and my mother in the back. As the back window was fogged up, she got out to clean it on the outside and he drove off. After a while the guest reportedly said: “Is your wife in the car?” to which my father is alleged to have replied: “Goodness me. I don’t believe she is.” At which point he turned the car around’. Despite such lapses, Morrell did pay attention to detail, as Neil Howard notes: ‘It was quite a performance when he would halt in a lecture, take out a propelling pencil, propel the lead, insert a comma in his lecture notes, ‘unpropel’ the pencil and replace it in his pocket then carry on’.

There were far fewer women academics back in the day and, since they had to overcome significant obstacles to achieve academic careers, they could not really afford to be absent-minded. Nevertheless, women professors stood out and eccentricity was not confined to the male of the species. Sticking to the transport theme, I don’t know if home science professor Ann Gilchrist Strong was a good driver, but her Model A Ford was a prized possession. 1920s student Sylvia Keane recalled that another of the professor’s prize possessions was her fox terrier Binkie, who had a basket in Strong’s office and ‘sported a bright scarlet coat in the winter’. It was ‘quite a memorable sight to see her sitting up beside Mrs Strong in the car’. The first home science professor, Winifred Boys-Smith, used a bicycle rather than a car. In contrast to the American Strong, Boys-Smith was ‘English to the backbone’, recalled Agnes Blackie, and ‘had a clear idea of the respect due to her position’. She was ‘a well-known figure as, clad in an ankle-length, black, caped waterproof coat and a broad-brimmed hat held securely in place with an enveloping motor-veil, she cycled from place to place round the university’.

Eccentricity and absent-mindedness do, of course, survive on campus to this day, but for obvious reasons I have confined these tales to people who have long since departed!

5 thoughts on “The absent-minded professor”