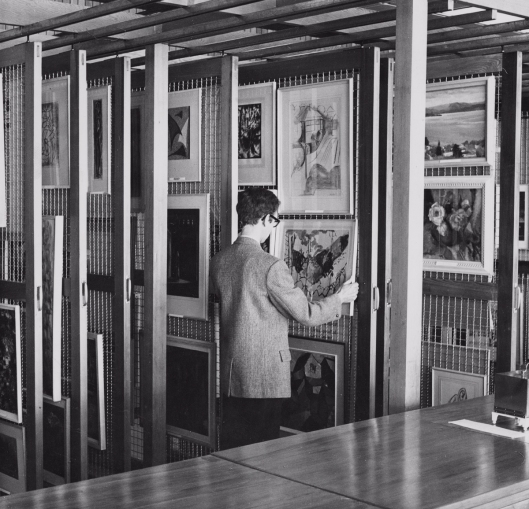 Otago does not, like some universities, have a fine arts programme; the highly-regarded Dunedin School of Art, established in 1870, is part of Otago Polytechnic. But the university has not neglected art: it has an art history programme, a prestigious fellowship for artists and one of New Zealand’s finest art collections.

That collection began when Thomas Morland Hocken donated his large collection of publications, archives, maps, photographs and paintings to the University of Otago, to be held in trust for the people of New Zealand. The deed of trust was signed in 1907, and in 1910 – shortly before Hocken’s death – the Hocken Library opened in a new wing of the Otago Museum (which was then run by the university). Hocken’s donation included over 400 pictures. Although his wife Bessie Hocken was a painter and photographer, he was not really interested in art for its aesthetics, but for the evidence it provided for research into his true passion, New Zealand history. The artworks he donated ranged from landscapes to political cartoons to paintings of Māori people and activities, and many included keys created by the Hockens to identify people and topographical features. Over the next few decades the library purchased further artworks and others were donated; the first published catalogue of the pictorial collection, dated 1948, included hundreds more works. Like the original collection, additions were mostly acquired for their historical interest, but they included many fine drawings and paintings. A great example is John Buchanan’s 1863 painting of Milford Sound. Linda Tyler, formerly pictorial curator at the Hocken, described this 1920s acquisition as ‘one of the icons of New Zealand art’; she recently discussed it on radio as her favourite New Zealand painting.

From the 1950s the Hocken pictorial collection took a new direction thanks to the influence – and generosity – of some noted art experts and collectors. Poet and editor Charles Brasch headed a new Hocken pictures subcommittee and – not without some opposition – shifted the acquisitions focus from history to aesthetics, and to include modern works. Brasch’s friend Rodney Kennedy made the first of many significant gifts to the Hocken in 1956 with 23 drawings by Colin McCahon. Kennedy attended the Dunedin School of Art in the 1920s and had many artist friends and a fine collection of New Zealand artworks; he was well-known around Otago as a long-serving drama tutor for the university extension department. Brasch, too, began gifting paintings in the late 1950s; both men gave further significant artworks during their lifetimes and by bequest. The Hocken’s important collection of McCahon’s works started with Kennedy and Brasch, but continued with gifts directly from McCahon and a bequest from his parents. Charlton Edgar, who taught at the Dunedin School of Art in the 1930s, gave nearly 400 works to the Hocken in 1961. This gift – known as the Mona Edgar collection in honour of his wife – ‘would update the Hocken with thirty years worth of modern New Zealand art’, wrote Tyler; it ‘changed the historical orientation of the collection irrevocably’. In subsequent decades the Hocken continued to purchase and receive generous donations of New Zealand artworks both modern and historical; by 2007 it held some 14,000 pictures. Those artworks have appeared in many exhibitions (in Dunedin and beyond) and publications and some can now be viewed digitally on the Otago University Research Heritage website. Dr Hocken little knew what he was starting when he gifted those 400 or so works depicting the history of New Zealand to the people of this country!

From 1966 the Hocken benefited from the existence of the Frances Hodgkins Fellowship, named in honour of one of New Zealand’s greatest artists. Modelled on the university’s Robert Burns Fellowship for writers, which had commenced in 1959, the new fellowship offered artists the opportunity to live in Dunedin for a year with a secure income and studio space provided; they had complete freedom of expression to work on projects of their choice. Anonymous ‘friends of the university’ made a large donation which endowed the fellowship, designed to aid and encourage painters and sculptors and foster interest in the arts at the university. The university was becoming an important patron of the arts, with fellowships for composers and dancers and children’s writers to follow later. Such fellowships were few and far between in New Zealand, so they carried considerable prestige. 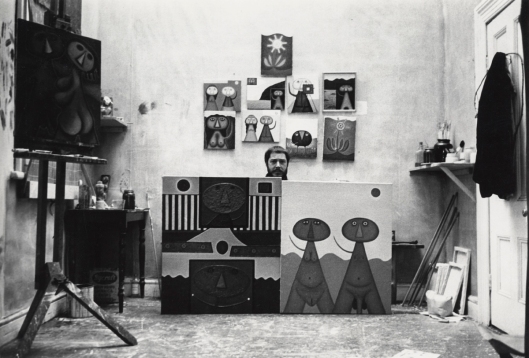 Michael Illingworth, photographed in his studio by Max Oettli, 1968. Illingworth was the first Frances Hodgkins Fellow in 1966. Image courtesy of the Hocken Collections, P2011-027, S16-102c. Reproduced with the kind permission of Max Oettli and Dene Illingworth.

The rules stated that potential fellows needed to have ‘executed sufficient work’ to demonstrate talent as a painter or sculptor, and shown that they were ‘a serious artist’ who would be ‘diligent’ in developing their talent and would benefit from the fellowship. There was no requirement for applicants to have any formal education in fine arts, ensuring ‘mavericks’ would not be cut out. The university – or, at least, its selection committee – from the beginning showed a willingness to be bold and support innovative and sometimes controversial artists. The first Frances Hodgkins Fellow, Michael Illingworth, made the news a year earlier when his painting As Adam and Eve, on show at Auckland’s Barry Lett Galleries, attracted an obscenity complaint to the police. That incident cemented the painter’s frustration with the conservatism of middle-class New Zealand. A friend, the writer Kevin Ireland, later described Illingworth as ‘a person with a blunderbuss conversation and philosophy – he sprayed out and hit everything yet his art was so worked and jewel-like and carefully done’. The fellowship got off to rather an unfortunate start when Illingworth left halfway through his 1966 tenure, claiming he couldn’t work in the studio provided. The second Frances Hodgkins Fellow, sculptor Tanya Ashken, found Dunedin more congenial. Among the friends she made was Philip Smithells, director of the physical education school; she joined the students in his gymnastic classes and her observations of their movements and poses contributed to her new sculpture. Following her fellowship there was an exhibition of her work in the foyer of the museum (where the Hocken was still located).

Finding a suitable space for the fellows proved a long-term challenge. In 1975 the Cumberland St house where fellow John Parker had his studio was demolished partway through his term and he moved into an alternative in Leith St. In 1978 fellow Grahame Sydney declared the latest space, near the Leith, ‘a completely satisfactory studio’, but that one didn’t last either. The 2008 fellow, painter Heather Straka, noted that the then studio in Union Street West had good light and hours could pass without her realising: ‘Before I know it, it is 1am and I am still working’. For the past few years the studio has been in a prefab near the Albany Street music studio. Another challenge was funding. Although the original anonymous gift was intended to endow the fellowship permanently, by the late 1970s inflation had eroded the value of its income, along with those of the Burns and Mozart fellowships. The university held a successful appeal to boost fellowship funds, attracting donations from individuals and businesses, along with a government grant. In 1986 the university decided to withhold the Frances Hodgkins Fellowship for a year to build up its capital, but donations from the Queen Elizabeth II Arts Council and M.W. James Trust meant it could be offered for a shorter term of 6 months. Since then, the fellowship has been awarded every year.

The list of former Frances Hodgkins Fellows is a veritable who’s who of the New Zealand art world. Many of the artists held the fellowship fairly early or mid-career and went on to great acclaim, such as Ralph Hotere (1969), Marilynn Webb (1974), Jeffrey Harris (1977), Gretchen Albrecht (1981), Fiona Pardington (1996 and 1997), Shane Cotton (1998) and Seraphine Pick (1999). ‘It’s flattering to be in such good company’, said Heather Straka during her tenure. ‘Everyone who has come through this residency has been of quite good note and has produced great work while on the residency’. Freedom from financial worry – for a year, at least – led to the production of many fine works of art: John Ward Knox, the 2015 fellow, described it as ‘a windfall of time and space and freedom’ to create. The Hocken showcased the work of each fellow through an exhibition hosted soon after their tenure, and acquired some of those works for its collection.

If you’re in Dunedin, take the opportunity to see some of the highlights of the Hocken at its current exhibition (on until 22 October). And keep an eye out for the exhibition to be held later this year at the Hocken Collections and Dunedin Public Art Gallery to mark 50 years of the Frances Hodgkins Fellowship. If you’re further away, you can still enjoy many of the Hocken’s art treasures in digital format – happy viewing!