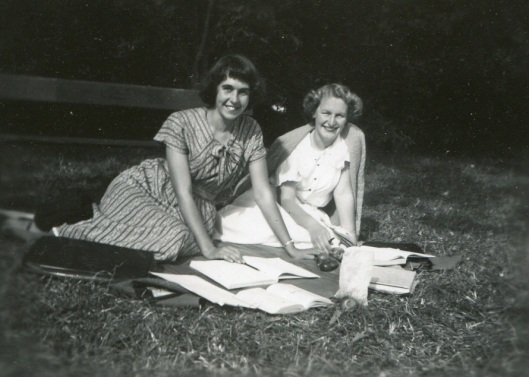 It’s that time of year when a sunny day brings students outdoors with their books (or perhaps their laptops). Many a pleasant spot around the north end of town will feature somebody relaxing in the sun while supposedly studying for exams. End of year exams are a big feature of university life to this day, but they are not the be all and end all that they once were. Students’ grades no longer completely depend on that one test at the end of the year, and they no longer have to worry about their exam scripts being lost en route to Britain for marking!

From 1874 to 1961 Otago was one of the constituent colleges of the University of New Zealand, which was this country’s sole degree-awarding institution. It set all the regulations for degrees, including those around exams. The issue of how students were examined was controversial from the very beginning. Should university professors grade the exams of their own students? Should they set the exams themselves? Theoretically, as the curriculum was set at a national level, students throughout the country should be studying the same material and could sit the same exam.

To ensure its degrees had high academic creditibility, the University of New Zealand decided to appoint examiners in Britain. For several decades, New Zealand university exam scripts in the arts and sciences travelled by ship to England, to be graded by examiners who knew nothing of the students’ circumstances. One disadvantage of this system was the inevitable delay. 1870s students did not learn their exam results until the middle of the year; later on results were sent by cable, meaning they might find out how they had done by the end of February. The hard work of students sitting exams in 1897 went to waste when their scripts were all lost in the wreck of the cargo steamship Mataura on its way to England. The external system retained many supporters despite this disaster. The Otago Daily Times commented in the aftermath that the system of marking by eminent British scholars “gives the New Zealand degree distinct and special value, and the New Zealand University is the only one outside Britain that subjects its students to this severe test.”

As time went on, more and more people felt the external exam system was unnecessary, but agreeing on any change proved very difficult for the University of New Zealand Senate. From the mid-1920s Stage I and II BA and BSc exams were set and marked in New Zealand, with professors taking turns in acting as examiners for the whole country (they did this in pairs rather than individually). But only World War II, with its high risk to shipping, finally ended the University of New Zealand practice of sending advanced exam scripts to Britain.

The next step for reformers was to get exams localised to each institution. From as early as the 1890s, medical school professors had examined their own students, with an external examiner acting as quality controller – this was known as the “external-internal” system. Arts and science professors wanted this privilege as well, so they could fit exams better to local adaptations of the national curriculum. The change happened in gradual steps, but by 1949 all arts and science exams were “external-internal”. This was part of a bigger devolution of powers to each institution, and in the 1950s the university colleges earned the right to set their own courses as well as their own exams (though these still had to be approved by the University of New Zealand’s curriculum committee).

The next big change to exams came after pressure from students, who were concerned about the enormous burden of the final exam, which accounted for 100% of their course grade. Students had to complete “terms” in order to sit exams, meaning they had to reach a minimum standard in their course work, but other than that their year’s work counted for nothing. After a campaign for change from OUSA, in 1973 the arts faculty introduced internal assessment – at least 15% of students’ final grades now came from their work through the year. Internal assessment quickly became general, and the coursework component of final marks gradually increased.

OUSA soon regretted the introduction of internal assessment. While it helped people who were bright and worked hard but didn’t cope well with exams, everybody else now had added pressure. No longer could anybody “slack off” during the year, but still pass their course with some last minute cramming before final exams. Students now had to work hard on assignments and tests throughout the year, and final exams still mattered enough to be stressful. There was less freedom to indulge in all the other activities of student life.

The other big change to exam practice came with the reorganisation of the academic year into semesters in 1994. “Final” exams now took place twice a year, which was another blow to the time available for non-academic pursuits. From 2001, the arrival of summer school meant some students faced three sets of exams. We should spare a thought for the academics, too, for they now have two or three spells a year of setting and marking exams.

Exams have come a long way since the 1870s. For Otago’s first century, they counted for everything. For better or worse, internal assessment came to stay in the 1970s, but exams remain an important feature of student life. They may be stressful, but they also provide a chance to shine – my best wishes to all of you who are sitting exams this month!

Exams for the first semester of 2013 will be over in a few days, but perhaps students will still appreciate a little advice, first offered a century ago. This comes from a wee gem of a booklet (165 x 126mm, 13 pages) written by Thomas Gilray and published in 1913: Rules for the Work of the English Classes in the University of Otago.

A “good examination paper”, wrote Gilray, requires “more than the possession of the requisite knowledge; candidates must know how to manipulate or arrange it.” The six elements making up the “good” paper were briefly summarised as:

Relevance was especially important: “Never insert irrelevant matter in an Examination Paper. Some examiners deduct marks for irrelevant matter; and, in any case, the candidate is wasting his, or her, time in writing it down; while, in addition, such a practice makes an examiner suspicious.” This was a period when exam papers were shipped “home” to England to be marked, so students did not have the advantage of a marker already familiar with their brilliance, who might perhaps offer them the benefit of the doubt.

Gilray’s philosophy on exams suggests that he would not have been the most forgiving of markers himself: “If Examination Papers are written according to good methods, they furnish a most valuable mental training to candidates; if they are written in a slovenly fashion, under the notion that anything will do, their power for good is greatly lessened, if it can be said to exist at all. Leniency in this matter on the part of a teacher or examiner is most prejudicial to the highest interests of students and candidates.”

Some of the “rules for examinations” are a little dated now – “Write your answers in black ink” – but other points remain just as valid today: “Read all the questions over carefully before beginning to write” and “Divide your time as well as you can among the different questions.”

Thomas Gilray was a Scot who excelled at the University of Edinburgh, continued his education in Berlin and Heidelberg, then returned to teach in the universities of Edinburgh, Glasgow and Dundee. He was appointed Professor of English at Otago in 1889 from a field of 51 applicants, and held that post until his death in 1920, aged 69. An obituary noted that he had “a singularly kindly and affectionate disposition and his genuine unselfish interest in each one of his students has won him their constant gratitude and esteem.” Gilray’s death came suddenly and dramatically, during the University of Otago’s jubilee celebrations. He was reading the lesson at the service in First Church which marked the opening of the celebrations when he collapsed and died. His last words came from Paul’s letter to the Corinthians: “Charity suffereth long, and is kind.”

The best of luck to all those sitting exams – just make sure you don’t write “in a slovenly fashion”!