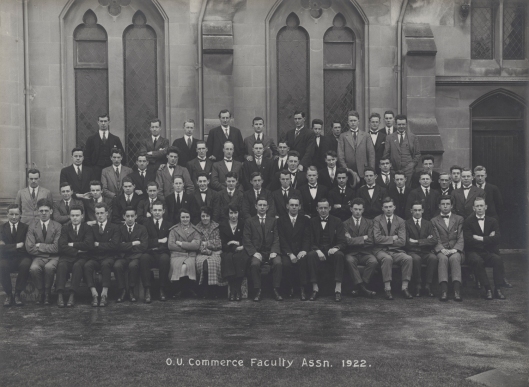 The University of Otago has been teaching commerce subjects for over a century, but for the first 50 years it was a part-time enterprise. While lectures in economics date back to the 1870s, other commerce disciplines started in the 20th century. In 1904, in response to advocacy from business leaders who wanted ‘keener, better educated, more live young men’ in the business world, the University of New Zealand approved a new degree, the Bachelor of Commerce. It was closely modelled on similar degrees recently introduced in England’s northern universities. The degree included a mix of subjects, some not yet taught at Otago, so it had little impact to begin with, but a few years later further advocacy from the business sector helped get commerce classes going.

The New Zealand Society of Accountants, which controlled entry to the accountancy profession, in 1911 negotiated with the University of New Zealand to have its examinations run by the university; the university amended its BCom syllabus so that its papers and topics met the qualifying requirements of the NZSA. Funding from the NZSA helped smooth the path of the new system. It offered a five-year subsidy to each of the university colleges; when supplemented with a matching subsidy from the government plus student fees this enabled the cash-strapped University of Otago to take on the new venture of teaching specialist commerce subjects in addition to its existing economics programme. In 1912 young Dunedin accountant George Reid, who had completed a BCom with honours at Victoria University College in 1910, commenced as Otago’s first part-time accounting lecturer, and economics lecturer Harry Bedford added to his schedule the business law teaching required by commerce students (mercantile law, rights and duties of trustees, law of bankruptcy and law of joint stock companies). The new classes met ‘a felt want, a fact which is amply demonstrated by the large number of students who have availed themselves of the facilities offered’, noted the university’s annual report; 46 students enrolled in commerce subjects in that first year.

For the first five decades, almost all commerce students were part-timers working towards their professional accountancy exams; they already had full-time jobs. They could have studied at the technical school or by correspondence from one of the commercial colleges, but the University of Otago courses were an attractive option for southerners, for the commerce faculty soon developed a reputation for high quality teaching, with students typically scoring very well in external exams. Though the early teachers were lauded for their professional knowledge, dedication and teaching skills, they were not, of course, without flaws. One accounting lecturer resigned suddenly in the middle of 1947 after he was accused of embezzling bank funds, hardly the desired behaviour of a man educating the next generation of accountants.

Very few students went on to complete degrees in the early decades. By 1920 just five Otago students had graduated with a BCom; the first, in 1915, was Owen Wilkinson. Before he had even received his certificate, Wilkinson had signed on with the Field Artillery and headed to Gallipoli; he later became an accountant in Christchurch and presided over the Canterbury Chamber of Commerce. It was a very masculine world. The first woman enrolled in the commerce faculty in 1914 and by 1917 the female roll had reached 13. The dean, George Reid, reported that ‘during the latter part of the war period, exceptional opportunities opened up for women in the more advanced branches of commercial work’, with a ‘large number of women seeking to qualify themselves by attendance at the classes in commerce’. But in 1920 female enrolments fell, with just 6 women studying alongside 130 men: ‘evidently the reinstatement of returned soldiers in commercial occupations has made commercial training less attractive to women’, noted Reid. The faculty wanted to attract women, stating in bold print in the 1920 calendar that classes were ‘open to persons of both sexes, without restriction as to age or occupation’. But numbers remained low, and by the time the next world war broke out there were just 9 women studying alongside 118 men.

Classes were held outside business hours to suit both students and lecturers, who were practising accountants and lawyers. Tom Cowan, a student of the 1930s and part-time lecturer from the 1940s, noted they ‘shivered through law lectures in the early mornings and … at the end of the day returned to their desks in the Lower Oliver classroom to study accounting’. An anonymous commerce student noted the advantages and disadvantages of part-time study in a 1946 Review article. ‘Because he dissipates his energy for eight hours a day in an office, [the part-time student] invariably approaches his study with a weary mind, which is not conducive to the clearest thought and greatest absorption’. Part-timers had to develop an ‘orderly and efficient’ attitude, ‘qualities to be commended in all who seek advancement and success, at least in the commercial world’. They had ‘little time for the frivolities and interests so precious to the average student’. However, commerce students did support one another through their own students’ association. This organised various social events, including an annual dinner and ball and rugby matches against the law faculty; debating flourished in the 1920s and by the 1930s there was an annual fancy dress post-exam party at the Gardens tea kiosk.

The 1960s were revolutionary for commerce education at Otago. In 1960 – 48 years after teaching had begun – Tom Cowan became the first ever full-time staff member and was promoted to a new chair of accountancy the following year. He set up in an office ‘right under the clock tower, then in a shaky condition. Perhaps there was some hope that an Act of God might crush the Commerce intruder and his fledgling Department, and, with him, the threatening aspirations of his Faculty’, recalled Cowan. From 1962, controversially, Otago’s commerce lectures shifted from the evening and early mornings to daytime, with the advanced accounting courses on Saturdays as part of a compromise with local employers. It was all part of a strategy to recruit more full-time and degree students; the 1960 Parry report on New Zealand universities was highly critical of part-time study, which was associated with high attrition rates, and commerce faculties were the worst offenders. The faculty was now able to introduce tutorials in the evenings, giving students more contact time with their teachers; course standards rose. Employers became more reluctant to employ part-time students, since they needed to be released during business hours for lectures, and full-time study became more attractive. By 1970, two-thirds of commerce students were full-time, a dramatic change from the 8% of 1960, and in the same period degree completions in commerce jumped from 8 to 76. The roll also grew dramatically, like that of the university as a whole; there were 238 commerce students in 1960, but 580 in 1970 (together with an additional 92 external students, mostly in Invercargill). Some of these new students were attracted to the greater diversity of subjects on offer. From the mid-1960s BCom students could choose between three majors: accounting, economics or management. Otago’s first management course was taught in 1962 and marketing courses commenced in 1966; both proved popular immediately and acquired their own professors the following decade … but that’s another story!

Do you have any memories to share of the accounting night school days? I’m keen to track down photographs relating to the commerce faculty (right through to the 1990s) – I’ve found plenty of formal portraits, but would love to see some more interesting images!