University of Otago staff are in demand to provide expert comment via the media on a very wide range of topics, and these days they can be accessed in a wide range of formats, from the traditional newspapers, magazines, radio and television to more recent technologies such as blogs and other social media. The university also makes many of its public lectures available via its own channel on iTunesU. Robert Patman, Bryce Edwards and Brian Roper of the Department of Politics appear regularly in the media as political pundits, and Edwards’s blog is a key source for those with an interest in current events. Mark Henaghan and Andrew Geddis from the Faculty of Law also appear frequently in the media.

In the ever-evolving media environment, radio remains one of the most popular means of disseminating some of the scholarship coming out of Otago. Just this morning, my colleague John Stenhouse of the Department of History and Art History spoke about a recent publication revising traditional assessments of one of New Zealand’s early governors, Robert Fitzroy, on Radio New Zealand National; his co-author Hamish Spencer of the Department of Zoology spoke about Fitzroy with Kathryn Ryan on the same station a few days ago. Among the other Otago staff interviewed at some length on Radio New Zealand National in the past month are Graeme Downes and Ian Chapman from the Department of Music (on Lorde’s current hit song), Philippa Howden-Chapman, Professor of Public Health in Wellington (on warrants of fitness for rental housing), Colin Gavaghan of the Faculty of Law (on the patenting of tools for gene selection), Peter Dearden of the Department of Biochemistry (on diet and longevity) and Dave Warren from the Department of Chemistry (on science ‘magic’ shows).

It seems only fitting that Otago staff should appear often on the radio, because Robert Jack, Professor of Physics from 1914 to 1948, was the pioneer of radio broadcasting in this country. In 1921, assisted by other staff from the Department of Physics, Jack broadcast New Zealand’s first radio programme, just a year or two after the world’s first radio stations went on air in the USA and Holland. Like many Otago staff both past and present, Jack was skilled at popularising his scholarship in the form of public lectures – the radio offered a new opportunity to reach out beyond the walls of academia. This was clearly the goal of his colleague Robert Bell, Professor of Mathematics from 1919 to 1948, in his 1940 broadcast on 4YA Dunedin, “The human side of mathematics”. As the Listener commented, figures may at first seem dull, but Bell “knows very well how to make them interesting”. The cartoon of the clichéd “hoary old beaver” of a mathematician bore little resemblance to Bell, a dapper Scotsman renowned for his clear thinking and his warm nature. 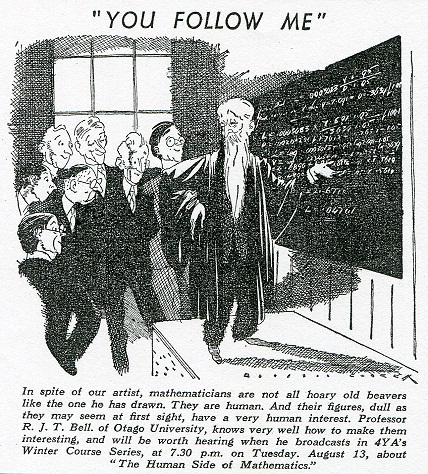 A cartoon which accompanied the listing for Professor Bell’s radio talk, from the Listener, 9 August 1940. Reproduced with the permission of the New Zealand Listener.

Perhaps the most influential radio programmes to originate from the University of Otago were those presented by the Extension Service of the School of Home Science. The service commenced in 1929 to provide outreach into the community, particularly the rural community, through tutors and a consultation service for the public. I’m not sure when their regular radio broadcasts began or ended, but a 1958 survey of an Otago town (possibly Oamaru) by Judith King of the Department of Adult Education revealed that a quarter of the women surveyed were “constant listeners” to the weekly home science talks on the YA network (intriguingly, King dismissed this as “only 25 per cent”). Most of these programmes focussed on nutrition and foods, but a few surviving scripts in the archives of the Department of Clothing and Textiles reveal that home science staff also gave radio talks on various other topics, such as creating a wardrobe. By the 1960s the Extension Service was also producing cookery programmes for commercial radio stations.

These days we can listen to radio programmes at our leisure by podcast or via the internet, as evidenced by the links in this post to recent broadcasts. Radio was once a much more ephemeral medium, but it could still have lasting significance. In her 1958 survey, King encountered a woman who, each week when the home science radio talk was due, “sat down with pencil and paper to record the ideas and recipes.”

Have radio programmes and interviews with Otago staff had an impact on your life? Were there any particularly engaging radio speakers from the university? Do you remember listening to the home science radio talks? I’d love to hear more about Otago’s radio connections!