The “Students’ Union and Mining School” (now known as the Archway Building), from the University of Otago Annual Report, 1929. The School of Mines was on the left of the archway and the union on the right.

Exactly 100 years ago, on 7 April 1914, Allen Hall was formally opened as part of Otago’s first student union building. The Governor of New Zealand, Lord Liverpool, arrived on campus to mark the grand occasion, when the new classrooms known as the Oliver Wing (an extension to the clocktower building, now part of the registry) were also opened. In the new assembly hall the Governor commented to a large and appreciative audience that he wished Otago students “the best of luck, frivolity and joy.”

This occasion was the culmination of many years of campaigning and fundraising by both students and staff. Before Allen Hall, students had no suitable place to meet and socialise. The Mayor of Dunedin, future cabinet minister William Downie Stewart, reflected at the opening on his own student days during the 1890s. In the new buildings, he commented, “it would be possible not only for the male under-graduates and the lady under-graduates to have afternoon tea, but they would be able to have it in company. That was an undreamt of luxury in his day, and as a consequence some of them had grown up rather shy.”

The students’ association and Christian Union had been wanting facilities for quite some time, but the campaign gathered momentum around 1908, when Thomas Gilray, Professor of English and Chair of the Professorial Board, took up the cause. “Certainly nothing is more urgently required by us at the present time than a suitable building for the use of students,” he wrote in his 1908 annual report. As the University Council had no funds to spare, the cost of any building would have to come from fundraising and special government grants. Students did what they could to raise money at various carnivals, but Gilray realised they needed to get the local community involved and invited “the ladies of Dunedin” to hold a bazaar. This took place in 1909 and raised an impressive sum – nearly £1200, the equivalent of around $200,000 today. After that, stated Gilray, “it was time for the men of the community to do something.” Various local worthies donated generous sums, led off by the Chancellor, James Allen, who headed a fundraising committee. Allen – whose home Arana later became a residential college – was also an influential parliamentarian, and he persuaded the Prime Minister, Southlander Joseph Ward, to commit the government to a generous subsidy, supplying £2 for every £1 raised. One celebrity donor was the Antarctic explorer Ernest Shackleton, who donated the proceeds of a public lecture to the student building fund.

The new bluestone building was designed by Edmund Anscombe to fit with the original university buildings and other additions, including the adjacent School of Mines, also designed by Anscombe. It contained a large assembly hall (named Allen Hall in recognition of the contribution of James Allen to the project and to the university), student executive room, common rooms (one each for men and women), dressing rooms, bathrooms, a “buffet” (canteen) and “other accessories of an up-to-date building.” Allen Hall became a venue for occasions both formal and informal, for meetings, dances and all sorts of “frivolity and joy.” Students also had, finally, a place to relax and grab a bite between classes.

There were just over 600 students at Otago when Allen Hall opened in 1914. As numbers crept up over the next few decades, the student union became increasingly crowded. Students of the 1940s recall being squashed in shoulder to shoulder at dances; the canteen was getting too small and it was difficult to fit everybody in when there was a large meeting. After another long period of planning and fundraising, the current student union building was opened in 1960, when the student roll was 2666. Another floor was added nine years later, with the roll already almost doubled again. 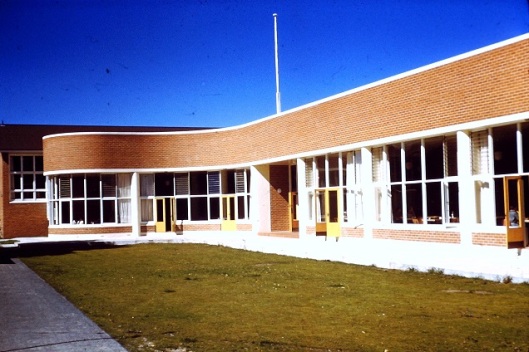 The current Student Union building in the 1960s, before another storey was added. Photograph courtesy of Arthur Campbell.

Once the student union had moved out, Allen Hall fell into a period of neglect and was seldom used. It was revived in the 1980s as the centre of the theatre studies programme; long-time staff member Lisa Warrington describes it as “a great testing ground for students” and it has hosted hundreds of plays, including the popular Lunchtime Theatre (held weekly during teaching time). Later this year, in September, theatre studies is holding a reunion – open to anybody with a connection to Allen Hall – to mark the centenary. You can read more about the centenary celebrations and theatre studies in a recent Otago Magazine article.

The Historic Places Trust registered Otago’s first student union as an historic place in 1988. It is significant architecturally, as part of the famous complex of historic buildings at the centre of the university. But it is also much more than that. For nearly fifty years the building was a social centre for the thousands of students that passed through Otago. The “frivolity and joy” wished to Otago students by the Governor one hundred years ago was then expressed in a new way in Allen Hall, through the many stage productions presented there through the theatre studies programme. Happy centenary Allen Hall! Do you have any memories to share of events in this now venerable building?

These days Allen Hall is full of drama – it is the home of the university’s theatre studies programme and venue for its weekly lunchtime theatre performances. But this building, which housed the student union until the current union building opened in 1974, also witnessed various drama performances long before theatre studies appeared on the scene. During the 1960s and 1970s the Department of Modern Languages (which split into separate French, German and Russian departments around 1970) staged plays in French and German. Some of the 1960s plays took place off-campus at the Globe Theatre, but by the 1970s Allen Hall had become the main venue.

The French play was not a formal part of the department’s teaching programme, but an extracurricular activity involving a lot of hard work and fun. Staff, students, former students and friends of the department all played roles. The productions revealed considerable talent, and not just for acting. The programme for Jean Anouilh’s Antigone, presented in 1965, was handsomely designed by John Brown and printed on a handpress by French lecturer Roger Collins, while William Southgate, destined to become a well-known conductor and composer, took charge of the music. The title role of Antigone went to Dorothy Page, later head of Otago’s Department of History.

Works by the great comic playwright Molière (1622-1673) were always a popular choice. Those produced at Otago included Les Femmes Savantes (1964), Tartuffe (1966), Le Malade Imaginaire (1971) and Le Mariage Forcé/Les Précieuses Ridicules (1974). The Evening Star commented in its review of Le Malade Imaginaire that “the fact that the play is spoken in French did not deter a large audience; and by way of reward for facing a bleak, wet night, they were entertained by a piece for the theatre as lively and as enjoyable as when it was first presented in 1673.” The “lively, warm-hearted, completely entertaining” production ran for three performances. French lecturer Ray Stone played the hypochondriac Argan, but the best-known name on the programme today is that of poet Cilla McQueen, who graduated MA from Otago in 1971. She played the role of Argan’s servant Toinette.

I am grateful to Roger Collins for sharing with me his programmes and photographs of these productions. Did you ever perform in, or attend, one of Otago’s French or German plays?