This post was researched and written by University of Otago history student Bree Wooller in 2017.

North Dunedin has not always been occupied by students. For most of its history it has been just another suburb. Now, the houses are crumbling, and we risk losing the heritage and character that has become iconic to the area.

The gold rush of the 1860s made Dunedin the richest and most highly populated province in New Zealand.[1] This influx of wealth influenced the building of large, elegant, houses along the town belt. In 1880, David Henderson built a house at 86 Queen Street. In its early years 86 Queen was considered a charming, first-class, modern residence.[2] The early occupants were wealthy; regular adverts posted in the local papers look for domestic help, and furniture auctions reveal the occupants lavish lifestyle.[3] Walnut pianos, marble vases, and oil paintings were common furnishings in 86 Queen Street at the time.[4]

John Laing, a ‘foreign agent,’ owned the house from 1909 to 1924. He lived there with his wife Kathleen, son John Carroll, and daughter Katherine.[5] John Carroll Laing was killed in action in Italy, 1943.[6] Professor William Salmond, known for his position on the chair of mental and moral philosophy at Otago University, appears to have resided at the house for a brief amount of time up until his death in 1917.[7] Kathleen Laing’s brother, Dr Francis Hotop, a surgeon at Dunedin Hospital lived with the family for a period around 1922.[8] Their father, Lewis Hotop, a pharmacist and three-time Mayor of Queenstown, was also living at the residence until his death in 1922.[9] 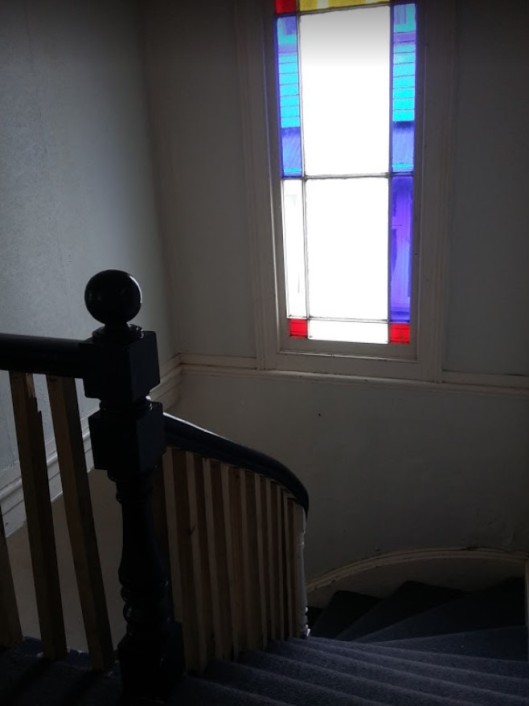 A new upstairs room was added in 1913, electricity was connected during the renovations.[10] In 1926, a garage was added at the front of the house.[11]

90 years ago, Dunedin was feeling the effects of the Great Depression.[12] Large houses along the town belt became too hard to maintain during this economic downturn, most were split into multiple dwellings. In the late 1930s, 86 Queen Street was split into a top and bottom flat.[13]

The house was rented in this period by a fast-changing array of occupants. Tenants included Miss Anna Glover, a spinster, who lived in the top flat 1940 to 1946, and an engineer named David Jack, who lived in the bottom flat from 1939-41.[14] The flat was owned by a retired salesman, Thomas McGoldrick, from 1944 till his death in 1969.[15] In 1958, the iconic yellow roughcasting replaced the houses traditional wooden exterior, making it resemble its present-day appearance.

Between 1969 and 1979, 86 Queen Street was owned and occupied by Richard Mulgan and his wife Margaret.[16] Mulgan was a professor of political studies at Otago University, known for his role on the New Zealand Royal Commission of 1985, which recommended the adoption of an MMP political system. Mulgan converted 86 Queen back to a single house, and remodelled the kitchen in 1976. From 1979, the flat was owned and occupied by Duncan Roper and his wife Mirrel.[17] Duncan was a tutor at the university while residing in the house. 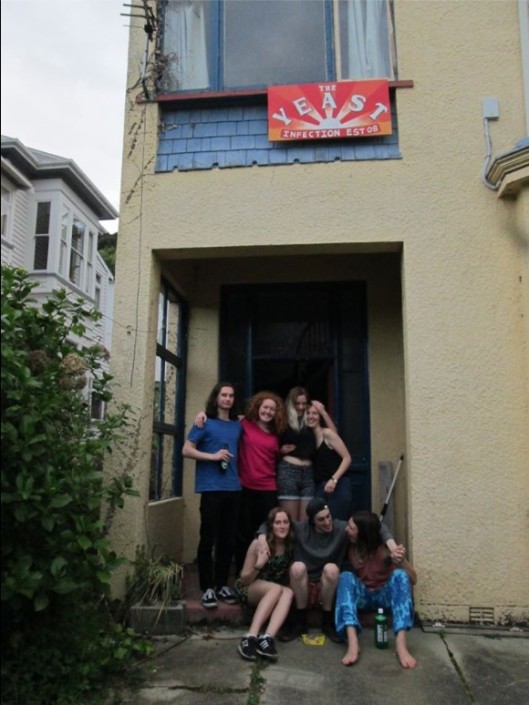 The beginning of student occupation at 86 Queen Street is ambiguous. Names and dates in an upstairs room suggest students were living in the flat from 2001, if not earlier. 86 Queen Street became known as “The Yeast Infection” in 2008.

In 2017, we face the continued issue of degrading student flats. Maintenance and care is needed to preserve old houses such as 86 Queen Street. Without this, many historic flats will be demolished. Along with them, aspects of student culture, and landmarks of the first settler’s Dunedin will be lost forever.

Elworthy, Sam. Ritual Song of Defiance: A Social History of Students at the University of Otago. Dunedin: OUSA. 1990.

McLeod, Catherine. “Halls of residence in the 1960s: curfews, couples and controversy.” In Tower Turmoil: Characters and Controversies at the University of Otago, edited by Time Keepers. Dunedin: Department of History, University of Otago. 2005.