History has been around for a while! It first appeared at the University of Otago in 1881 when John Mainwaring Brown, the new professor of English, constitutional history and political economy, taught constitutional history to a class of two students. It was a subject designed for lawyers, covering ‘the development of the English Constitution, and of the Constitutional relations between the Mother Country and the Colonies’. The course, compulsory for the LLB degree, was also open to BA students. Mainwaring Brown’s career was cut tragically short when he disappeared during a tramping expedition in Fiordland in December 1888. The university council recognised that it would be difficult to find somebody capable and willing to teach all of the subjects he had covered and appointed a new professor of English, with separate lecturers for constitutional history and political economy (economics). Alfred Barclay, one of Otago’s earliest graduates and a practising barrister, taught constitutional history for many years, except in the early years of the 20th century when the law school was closed and the subject wasn’t offered. 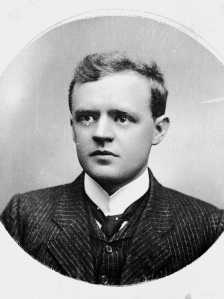 In 1914, history emerged as a subject in its own right with a new course in ‘English history’. It was taught by Harry Bedford, who had been Otago’s economics lecturer since 1907. Bedford had an impressive CV; he was a brilliant local graduate who started his working life in his father’s tailoring business, served a term in parliament, and practised law while lecturing at Otago. The syllabus for ‘English history’ included ‘a study of the outlines of the History of England, including the development of the constitution down to 1900’, with a more detailed study of a different period each academic year. Constitutional history continued as a separate course for law students, and Bedford also devoted two special lectures a week to ‘Modern History, as prescribed for Commerce students’ from 1916. Bedford was an inspiring teacher and his appointment to a new professorship in economics and history in 1915 came as no surprise. Sadly, he was another promising young professor destined for a tragic death; he drowned during a beach holiday in 1918. With the times still unsettled due to war, the council appointed Archdeacon Woodthorpe, the retired Selwyn warden, as acting professor. But they felt the time had now come to separate the growing disciplines of economics and history, and in 1920 John Elder of Aberdeen was appointed to a new chair in history, endowed by the Presbyterian Church.

Though the Presbyterians selected, appropriately enough, a ‘conservative and hard working Presbyterian’ from Scotland as Otago’s first history professor, Elder brought considerable innovation to the chair. He continued an extensive publishing career commenced in Scotland, producing both popular and academic works on New Zealand history at a time when ‘it was highly unusual for colonial professors to publish anything’. His developing interest in New Zealand’s history was also reflected in the curriculum, which expanded to include more coverage of this country and other colonies among the broad survey courses on offer. He valued archival research highly; this was made possible thanks to the resources held at the Hocken Library, and Elder required MA students to complete a thesis based on such sources. His dour manner didn’t endear him to students, though, and he soon put a stop to a young lecturer’s introduction of seminar discussions: ‘These young men like to hear themselves talk but you’re paid to lecture … So long as I’m head of this department, there’ll be no discussions’.

In 1946 William Morrell – who featured in an earlier blog post on absent-minded professors – succeeded Elder as professor of history. He was a local graduate who studied and taught at Oxford and the University of London, and published widely on imperial and New Zealand history; he later took on the important role of writing the university’s centenary history! Morrell believed not only that history illuminated the present, but that the political state was worthy of study in its own right, and it was through his influence that politics joined the Otago syllabus, initially as part of the history department. Ted Olssen, an Adelaide graduate, was appointed to teach political science and classes commenced in 1948. Students emerging out of the war years and their clash of political ideologies demonstrated an appetite for the subject; it grew and became a separate department in 1967.

Like his predecessors, Willie Morrell believed that New Zealanders’ study of history needed to start with the histories of Britain and Europe, but an imperial framework meant that regions which had come under European control – including New Zealand and the Pacific – also appeared on the syllabus. Gordon Parsonson, who first joined the department as assistant lecturer in 1951 and remains an active researcher in his late 90s, was partly hired because of his interest and experience in Melanesia, acquired during World War II military service there. Angus Ross was another lecturer with expertise on New Zealand and Pacific history, though his distinguished war service had been in Europe. After many years in the department he succeeded Morrell as professor in 1965 and ‘steered the department away from the legacy of imperial history by making appointments trained to look at imperialism from the perspective of the colonised’. John Omer-Cooper, a specialist in African history, took up the newly-established second chair in history in 1973, while Hew McLeod, who became a world-renowned expert on Sikh history and culture, joined the department to teach Asian history in 1971. From 1975 a revamped curriculum gave students majoring in history broader choices; previously compelled to start with European history, they could now, if they wished, focus instead on New Zealand, Australia, the Pacific or Asian history. 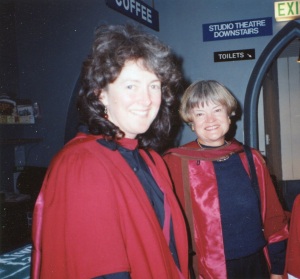 Barbara Brookes and Ann Trotter at a Federation of University Women event at the Fortune Theatre, 1993. Image courtesy of Ann Trotter.

Under the umbrella of the histories of various regions, new themes began to emerge, often led by younger staff. Erik Olssen and Dorothy Page, both appointed in 1969 and both future heads of department, became pioneers of social history and women’s history respectively. Ross had a policy of appointing women where possible; although Morrell had also appointed a couple of women in the 1940s, men had long dominated the staff. The policy of recruiting good women academics continued and by the late 1980s they made up nearly half the department. In addition to Page, there were Barbara Brookes (another women’s history expert), Ann Trotter (who taught Asian history and subsequently became assistant-VC for humanities), Pacific historian Judy Bennett and long-serving lecturer Marjorie Maslen.

Angela Wanhalla and Judy Bennett in 2009. Photograph by Sue Lang, courtesy of the history and art history department.

As part of the new movement towards social history, Olssen embarked on the Caversham project, a long-running study of historic residents of southern Dunedin. Generations of honours and postgrad students mined the huge store of data for new insights into work, politics, gender, culture and society in New Zealand’s earliest industrial suburbs. Other new themes which became popular in the late 20th century included environmental history and intellectual history (the history of ideas, incorporating science and religion), while world history provided an antidote to specialism in particular places and eras. A growing – if belated – awareness of the significance of Māori perspectives of history saw the appointment of Michael Reilly to a joint position in history and Māori studies in 1991. He later became full-time in Māori studies, but in the 21st century the history department was fortunate to recruit two brilliant young Ngāi Tahu scholars, Angela Wanhalla and Michael Stevens.

History, like any other department, had its ups and downs through the years; funding was often tight and the trend towards lower enrolments in the humanities led to a loss of two staff in 2016. Art history joined the department in 2001, with a change in name to the history and art history department in 2008. Throughout, it remained a highly productive department with an excellent research record, ranking first in New Zealand for history and art history in the 2003 and 2006 PBRF rounds. It was no slouch in teaching either; in 2002, when OUSA gave its first teaching awards, history was the only department to have two people – Tom Brooking and Tony Ballantyne – in the top 10. As a proud graduate of Otago’s history department, I can testify to the great skills of its staff!

Recruiting a new generation of students, 2016-style. These secondary students, photographed at Toitū Otago Settlers Museum, were attending a ‘hands-on history’ course run by the university. Photograph by Jane McCabe, courtesy of the history and art history department.