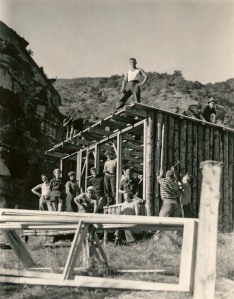 If you’ve ever stayed at the university’s Trotter’s Gorge Hut, you can be grateful to two pioneering Otago staff of the 1940s and 50s, Philip Smithells and Archie Douglas. Douglas, who graduated in medicine in 1932, returned to Otago in 1944 as a lecturer in the Department of Bacteriology and Public Health (later split into the microbiology and preventive medicine departments). Archie Douglas and Sir Charles Hercus, who was Professor of Public Health and Dean of the Medical School, set up the Student Health Service soon afterwards, partly as a tool to teach medical students about community and preventive medicine. The service, also open to teachers’ college students, was the first of its kind in the Australasian universities. It worked from the Department of Preventive Medicine until 1962, when it moved into new premises at 46 Union Street, and Douglas was director until his retirement in 1964.

Meanwhile, Philip Smithells arrived in Dunedin in 1947 as first director of the School of Physical Education. Smithells came from England to New Zealand in 1939 as superintendent of physical education for the Department of Education in Wellington. At Otago he developed from scratch a respected course in physical education, with a broad emphasis which included body mechanics, dance, recreation, sport and education alongside the basic health sciences. His belief that physical education was important to everybody, regardless of ability, was demonstrated in the remedial clinics offered by the school to children with physical impairments.

Smithells and Douglas were both advocates of outdoor recreation and loved getting out into the country. The exact details are unclear, but Douglas was, according to Smithells, “one of the instigators” of the Trotter’s Gorge Hut, which was built in 1951. He “hoped many students would spend weekends at this beautiful place as a change from town and life in halls of residence.” This was preventive medicine at its best. Of course the hut also provided a most convenient venue for the outdoor education component of the physical education course. The papers of Philip Smithells, held in the Hocken Collections, include many photographs of students enjoying a range of activities in Trotter’s Gorge, from rifle-shooting, archery, gymnastics and hiking to cooking outdoors. Also included is this great shot of the construction of the hut. It was mostly built by physical education students and staff, with a few helpers from other faculties. Please let me know if you can identify any of the people in the photograph!

Smithells wrote in 1967 that the hut had “never been used as much as was originally hoped.” However, it still stands in its beautiful location, ready to welcome students and other visitors for a minimal fee. With no electricity and no vehicle access Trotter’s Gorge Hut really does offer an opportunity to escape urban life!

1 thought on “Getting away from it all”