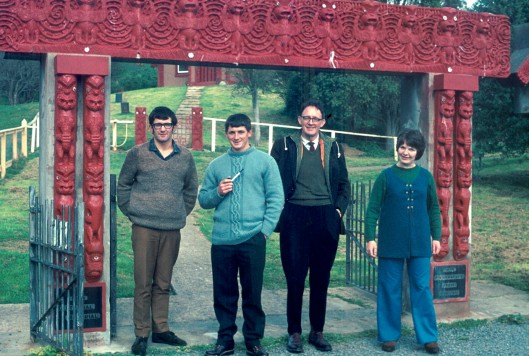 Like the Department of Psychology, Otago’s Department of Anthropology is a child of the 1960s. And like psychology, it produced some talented early graduates who went on to distinguished careers, including as professors at Otago. It also resembles psychology in having a long prehistory at Otago as a minor subject: indeed, Otago was the first university in Australasia to employ an anthropologist. Harry Skinner was appointed in 1918 as assistant curator at the Otago Museum (then run by the university) and lecturer in ethnology; soon afterwards he also took charge of the Hocken Library. A dedicated fossicker from childhood, he had graduated from Otago in zoology in 1913. After distinguished war service at Gallipoli, he was invalided out of the army and stayed on in England to study anthropology at Cambridge. In 1919 Otago offered its first teaching in anthropology as an extension course to anybody interested. Skinner gave the classes in ethnology, while other university staff gave lectures in their areas of interest: Dunlop, the Professor of Mental and Moral Philosophy, in cultural anthropology; Benson, Professor of Geology, in geological anthropology; and Benham, Professor of Biology, in anatomical anthropology. In the 1920s anthropology became available as an undergraduate course, with Skinner giving lectures in both physical and cultural anthropology. His heavy workload (he was director of the museum from 1937), and perhaps a lack of student demand, meant that anthropology was only taught at Stage I for four decades. After Skinner retired in 1952, there was a gap of several years before a new lecturer in anthropology was appointed, though the course was offered some years with the assistance of a visiting lecturer. Peter Gathercole, another Cambridge graduate, became the new anthropology lecturer in 1958 and revived the Stage I course. Two years later he founded the Otago Anthropological Society, which arranged local archaeological excavations and promoted much local interest. Demand for more advanced courses in anthropology at the university grew rapidly, and Gathercole successfully campaigned for more staff so a full degree programme could be offered. In 1963 John Harré and Les Groube joined the staff and the department really got off the ground: students enrolling for anthropology that year could, for the first time, major in the subject. The department had a name change to the Department of Anthropology and Archaeology in 2011, giving better recognition to archaeology, which has always been one of its strongest fields of research (for a decade or so prior to that it had incorporated other social science disciplines as the Department of Anthropology, Gender and Sociology, but they then became part of the new Department of Sociology, Gender and Social Work). From the beginning, the Department of Anthropology developed courses in both cultural anthropology and archaeology, together with biological anthropology, though teaching of the latter was eventually taken over by the Department of Anatomy. After further campaigning the first Professor of Anthropology, Charles Higham, was appointed in 1968; he had arrived in 1967 as a lecturer and remains a research professor in the department to this day. The subject quickly proved popular and by 1970 it had one of the largest first-year courses in the Faculty of Arts, with over 200 students; there were also already 12 MA students and 5 people working on an anthropology PhD. Among the first year anthropology students in 1963 was Helen Keedwell (later Helen Leach), who developed an interest in archaeology as a schoolgirl and became a founding member of the Anthropological Society. She remembers the first anthropology majors as a highly motivated group, passionate about the subject and very supportive, though also competitive! They persuaded the department to offer postgraduate courses immediately after they graduated so they could continue their studies at Otago, rather than having to move to Auckland (which had established a full anthropology department, complete with professor, around 1950). Helen Leach completed the Otago department’s first MA in 1968 and went on to a distinguished career in archaeology, teaching in the department for many years; she is now an emeritus professor. Several other Otago anthropology MA graduates of the 1960s and 1970s have also had distinguished academic careers, including teaching at Otago: Foss Leach, Ian Frazer and Atholl Anderson. Do you have any memories to share of the early years of the Department of Anthropology, now over fifty years old? Or perhaps you have some stories to share of its prehistory as a one part-time lecturer enterprise – in this guise it will soon reach its centenary!

1 thought on “Digging up anthropology’s past”