These days Allen Hall is full of drama – it is the home of the university’s theatre studies programme and venue for its weekly lunchtime theatre performances. But this building, which housed the student union until the current union building opened in 1974, also witnessed various drama performances long before theatre studies appeared on the scene. During the 1960s and 1970s the Department of Modern Languages (which split into separate French, German and Russian departments around 1970) staged plays in French and German. Some of the 1960s plays took place off-campus at the Globe Theatre, but by the 1970s Allen Hall had become the main venue. 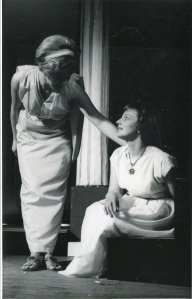 The French play was not a formal part of the department’s teaching programme, but an extracurricular activity involving a lot of hard work and fun. Staff, students, former students and friends of the department all played roles. The productions revealed considerable talent, and not just for acting. The programme for Jean Anouilh’s Antigone, presented in 1965, was handsomely designed by John Brown and printed on a handpress by French lecturer Roger Collins, while William Southgate, destined to become a well-known conductor and composer, took charge of the music. The title role of Antigone went to Dorothy Page, later head of Otago’s Department of History. 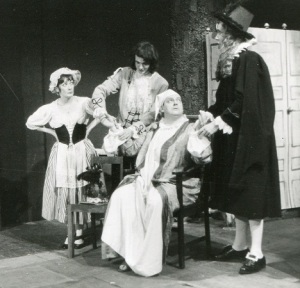 Works by the great comic playwright Molière (1622-1673) were always a popular choice. Those produced at Otago included Les Femmes Savantes (1964), Tartuffe (1966), Le Malade Imaginaire (1971) and Le Mariage Forcé/Les Précieuses Ridicules (1974). The Evening Star commented in its review of Le Malade Imaginaire that “the fact that the play is spoken in French did not deter a large audience; and by way of reward for facing a bleak, wet night, they were entertained by a piece for the theatre as lively and as enjoyable as when it was first presented in 1673.” The “lively, warm-hearted, completely entertaining” production ran for three performances. French lecturer Ray Stone played the hypochondriac Argan, but the best-known name on the programme today is that of poet Cilla McQueen, who graduated MA from Otago in 1971. She played the role of Argan’s servant Toinette. 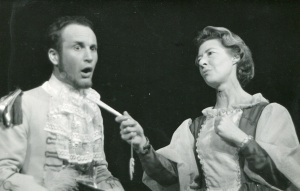 I am grateful to Roger Collins for sharing with me his programmes and photographs of these productions. Did you ever perform in, or attend, one of Otago’s French or German plays?

1 thought on “The drama of French”