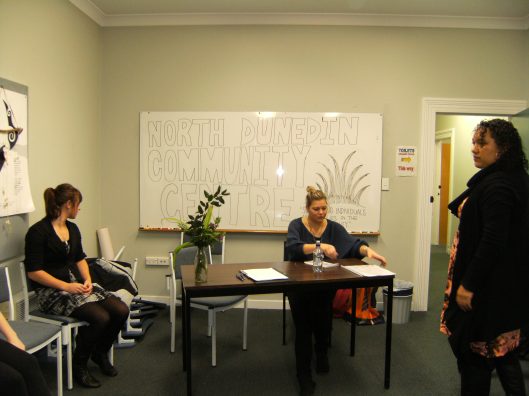 Social work students working through a scenario in their practice suite, 2010. Photo courtesy of the Department of Sociology, Gender and Social Work.

Because much social work provision comes out of the community sector, the formal education of social workers has been debated vigorously over the years. Otago’s first venture into this field came in 1959, when it offered short courses for social workers at the request of the recently-formed Otago Association of Social Workers and its Southland counterpart. Staff from New Zealand’s first tertiary social work course, which began at Victoria University of Wellington in 1950, visited Dunedin and Invercargill to lead these seminars. Otago’s university extension department continued to offer seminars and lecture courses for social workers through the 1960s, varying topics from year to year so returning students could obtain broad coverage of the discipline.

In the early 1970s the Department of Preventive and Social Medicine proposed a one-year diploma course in medical social work, but this never eventuated because of a lack of support from social workers, probably concerned that the course was too narrow and, worse, controlled by the powerful medical profession. Meanwhile, other professional social work courses got off the ground at Massey, Canterbury and Auckland. Otago decided to carry on with social work education through its extension service. In 1974 a new two-year part-time course for a Certificate in Theory and Practice of Social Work began. Local social welfare agencies provided support for the course, with the ‘work which over-burdened social workers are prepared to undertake to assist the University … a mark of the very great need that they see to have educational and training facilities in social work in the southern part of New Zealand upgraded’. In 1976 Patrick Shannon – destined for a long career at Otago – took on the Department of University Extension’s new role of Lecturer in Social and Community Studies, becoming responsible for the social work course. The course was ‘not a professional qualification’ and received no accreditation from the New Zealand Social Work Training Council, but had ‘a recognised place and value in the education of social workers, and provides a base for entry to further study’. It was popular and enrolments had to be limited.

Meanwhile, there were related developments in the Faculty of Home Science. The faculty had always kept its main focus on the sciences, but there was an element of the social as well. In 1977 the long-standing paper in ‘home management’ became ‘management for family living’ and in 1981 ‘family studies’, incorporating teaching on ‘the inter-relationship of the family and the community’ and ‘community health and welfare’. In 1987 David Buisson, the new dean, created a Community and Family Studies Development Unit ‘to give the impetus for developments in the social science and social policy areas’ in his restructuring of what now became the Faculty of Consumer and Applied Sciences. Over the next two years stage two and three courses in community and family studies replaced the old one-level family studies. The new curriculum covered ‘families in society’, ‘family resource management’, ‘crises in family and community development’ and ‘consumer issues’.

There were obvious common areas of interest between the new unit and the Department of University Extension’s Community Studies Centre. Late in 1988 they merged, bringing the popular Certificate in Social Work into the ambit of Consumer and Applied Sciences. In 1990, majors were introduced to the Bachelor of Consumer and Applied Sciences degree and students could now major in community and family studies. Other curriculum changes offered increasing options for those with an interest in social work. In 1993 the old certificate course evolved into the Diploma in Social and Community Work and in 1994 a new Postgraduate Diploma in Social Services was developed for those who had majored in community and family studies (or had equivalent qualifications or experience); both courses included fieldwork in addition to their theoretical component.

In 2001 community and family studies became an independent department and moved to the humanities division. The new department received a boost a couple of years later when its two social work programmes were the first to be approved under the Aotearoa New Zealand Association of Social Workers’ new certification process. ‘We got incredibly good ratings and there was nothing that had to be improved’, commented Raylee Kane, the Director of Professional Programmes; ‘we’ve set the benchmark and it’s really high’. A variety of new postgraduate programmes – mostly available part-time by distance teaching – added new options. A university review of the department in 2003 particularly commended both Kane and the long-serving head of social work, Pat Shannon, a ‘dedicated and exemplary’ leader. From 2005 a new name – the Department of Social Work and Community Development – reflected better its work, while the 2007 appointment of Amanda Barusch as the university’s first professor of social work boosted its research focus.

The introduction of social worker registration in 2003 presented challenges to Otago’s programmes. Registration was voluntary but some employers required it; clearly qualifications needed to fit into the new framework. In 2007 Otago commenced a new four-year undergraduate qualification, the Bachelor of Social and Community Work (from 2011 the Bachelor of Social Work), to fit the Social Workers Registration Board’s minimum requirement of a bachelor-level degree. Two years of ‘pre-professional’ study was followed by two years of professional education. Registration requirements saw the downfall of the old undergraduate diploma, along with another popular Otago qualification, the Postgraduate Diploma in Social and Community Work. 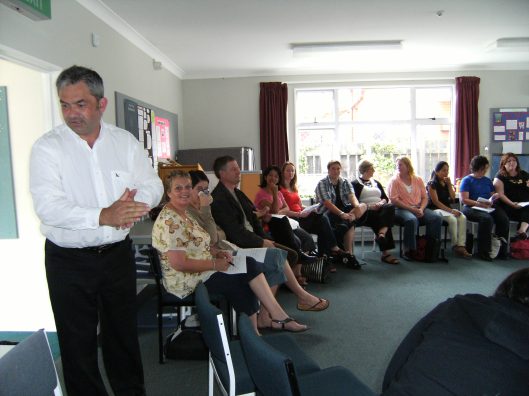 Shayne Walker teaching students on a block course, 2010. Photo courtesy of the Department of Sociology, Gender and Social Work.

In 2011 the department merged with two other small social science programmes to create the new Department of Sociology, Gender and Social Work – it has been a happy alliance thanks to excellent leadership and motivated staff. Indeed, through all its changes Otago’s social work programme has been fortunate to attract inspirational staff, frequently retaining them for long careers. In addition to helping shape future generations of social workers, staff have played important roles in advising government, and others, on social policy. Their commitment is epitomised in Shayne Walker, whose journey took him from being a child in care to a youth worker and foster parent dedicated to improving the lives of young Maori, long-time lecturer in social work, and now Chair of the Social Workers Registration Board.

Do you have any stories to share of Otago’s social worker education? I’d love to hear some personal anecdotes!